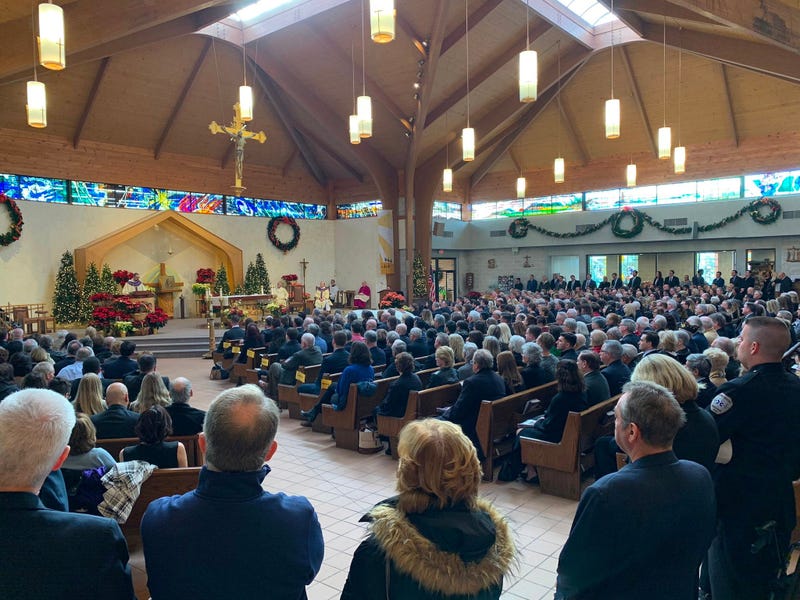 LEVITTOWN, Pa. (KYW Newsradio) — Hundreds of people paid their final respects to former Congressman Mike Fitzpatrick, who died on Monday at the age of 56 after a long battle with melanoma.

The homily was given by Father Thomas More Garrett, who worked for the congressman before he became a priest.

He remembered Fitzpatrick as a tough boss, a mentor, then a close friend, noting his favorite phrase from Fitzpatrick: When they got bad news, Fitzpatrick would look at him and say, "You think it’s easy? It ain’t easy."

Garrett said the last time he spoke with Fitzpatrick a few days ago, he asked him how he wanted to be remembered. Fitzpatrick told him, “Lord, make me an instrument of peace.” Garrett said that reminds him of the idea that “life is a journey,” and he says if that’s the case, Fitzpatrick “tried to flatten as many bumps on the road for as many people as he could for as long as he could to make the passage through this life a little more peaceful.”

One of those people: Ellen Saracini, the widow of Victor Saracini, who was the pilot for United Flight 175, the plane that hit the South Tower on 9/11. Ellen worked with Fitzpatrick on legislation to install secondary barriers on aircrafts, known as the Saracini Aviation Safety Act.

“If everyone tried to inspire themselves to be somewhat of a contributing member of society like (Fitzpatrick) was, we’d have a better society to live in,” Saracini said. “More than the lawmaker, more than the politician, Mike was a person. He was compassionate. He was always willing to be there for anyone, whatever they needed.”

Fitzpatrick also worked to ensure that Bucks County residents who died in 9/11 were honored and recognized.

Donald Mihalek, executive director of the Federal Law Enforcement Officers Association, said Fitzpatrick was like a brother to him. They worked closely on several bills, including legislation that gave benefits to 9/11 first responders.

“He truly cared about Bucks County. He cared about people as individuals and he cared more about making the world a better place than you’ll find in politicians these days,” he said.