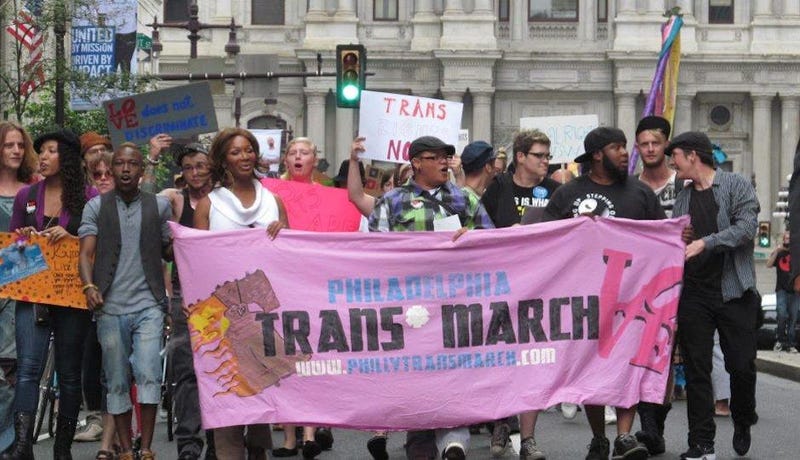 PHILADELPHIA (KYW Newsradio) — The Stonewall uprising is a source of inspiration for the modern transgender right movement.

"I heard something like pots and pans being scrambled all around, so I went through the door. Cops were coming in, and they looked at me and they said, 'Get the hell outta here!'" she says. "And I did. And I went to the phone booth and called my mom for a ticket."

Stories like hers have become part of the Stonewall legend. They're hard to confirm. It was barely covered in the news at the time, and there's not much of a historical record beyond memory and word of mouth.

"I'm one of the people who can unequivocally prove, unlike many, that I was definitely not at Stonewall," she quips.

"When in reality, the best history we have is that there was no brick," Williams says.

The story of the brick might be just another Stonewall legend. But both Johnson and Rivera did very real work by starting Street Transvestite Action Revolutionaries in 1970 to help homeless queer and trans kids and sex workers. In later years, STAR worked toward getting the larger LGBT rights community to recognize trans individuals.

"These people were at the forefront. [They> were trans women of color and other disenfranchised people," says Willliams.

McBride is from Delaware, where she helped pass legislation banning gender identity discrimination. She's the national press secretary of the Human Rights Campaign.

"It's taken too long, and in too many instances transgender people were left behind, or forgotten altogether," she says, "but I think over the last five years, our community and our movement has done a better job of living up to that legacy of Stonewall, of a movement that fights across our differences, recognizing that solidarity is our strength."

"I think it's a reflection of our community and our movement more fully reflecting and living up to the legacy of Stonewall," she says.

And looking ahead, she says, "I hope that 50 years from now, when they commemorate 100 years from Stonewall, that they'll look back and know that we did our part."​

For Nance Lomax, Stonewall is personal and a source of confidence.

"I think a lot of pride came from Stonewall. It did for me. It meant everything."

Fifty years after the uprising at Stonewall that marked a turning point in the fight for equality, KYW Newsradio examines the past, present, and future of the LGBTQ rights movement through voices from the Philadelphia region in the series "Stonewall Uprising 50th Anniversary."