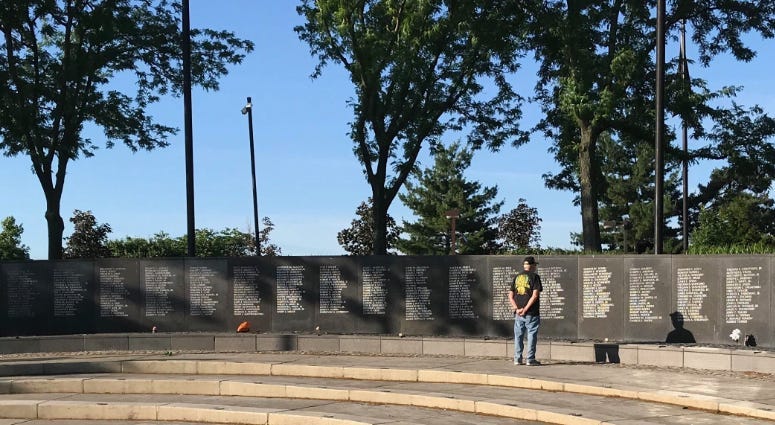 PHILADELPHIA (KYW Newsradio) — A slow stream of people trickled in early to the Philadelphia Vietnam Veterans Memorial at Spruce and Front streets to remember those lost in the war.

Many came to the memorial alone, solemnly staring at the wall and wiping tears from their eyes.

Andrew Shuman, who visited the wall Monday, was young enough to miss the war, but old enough to know that too many lives have been lost in the Vietnam War and so many others.

"It's an amazing day," he said. "When everyone else is just seeing this as a three-day weekend, (it) kind of loses its importance among everyone. It's a solemn day."

Ted Gallagher from Cherry Hill served in Vietnam from 1969 to 1970. He knew a handful of the names on the walls of the memorial; most of them went to Father Judge High School.

Gallagher also noted the focus of this holiday has to change.

"They can go ahead and celebrate, but you got to remember, go and remember the people that are here, and also the people that served not only in Vietnam, but Korea, World War II, Iraq and Afghanistan," he said.

One man pulled up in his car, popped the trunk, and pulled two large bouquets out. He walked to the wall, put them beneath two names, saluted, and walked away.

Another man, Julius Hall, came to remember his brothers. When asked what their names were, he said tearfully, "All of them; they are all my brothers."

Over in South Jersey, families, couples and vets dressed in colorful, patriotic outfits lined King Highway in Haddonfield waiting for a special military fly-by, along with the city's annual Memorial Day Parade.

Onlookers like Bobbie stood somberly, watching as the flags were presented for each war fought by American soldiers.

"We have a son-in-law who is active Army and our daughter is a former Army nurse. First time we've come here," she said. "A friend of ours is representing the Korean War era, and I was really pleased to see that a woman represented the Gulf War, because our daughter was in the Gulf War, so I will be able to tell her about that."

"I didn't lose my life. I was never assigned outside the United States, but I knew men who were — men who lost their lives for this country," he said. "You and I are here talking because of them."

"I'm hoping that this world will be a better world in the future," he said, "and maybe we won't have to have these kinds of things."

At more than a century old, Gannotta couldn't complain.

His daughter, Martha Leva, disagreed: "It's a once-in-a-lifetime (experience), and he deserves to be honored."