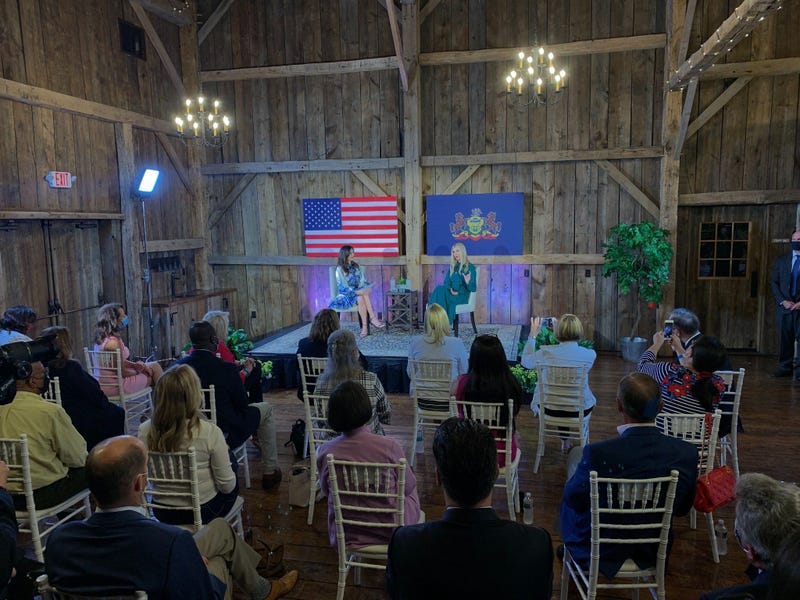 HONEY BROOK, Pa. (KYW Newsradio) — Ivanka Trump made some stops in the Philadelphia suburbs Friday to campaign for her father.

She spoke at an intimate gathering of about 30 people at an idyllic setting in rural Chester County, a place she also visited four years ago, where she promised to help her father get elected and address issues facing working women.

“First and foremost, America needed that champion,” she said of the president.

She talked about her father’s efforts to battle the coronavirus pandemic, like shutting down travel from China and Europe, obtaining generators for hospitals, and leading stimulus efforts.

“Leveraging all of government, he did a phenomenal job, and it’s still going,” she said.

Ivanka Trump also touched on Mideast politics, STEM education for women, child care, and jobs — at times painting a drastically different picture of the president than portrayed by his rally speeches or in his tweets.

“The enormity of the responsibility is very real, and he responds to it with tremendous heart,” Ivanka Trump said.

She did not mention the president’s personal opposition to mask-wearing or his tweets opposing shutdown orders back in April.

However, she said the pandemic has shown the need for better family policy, which, she noted, the Trump administration has moved toward by improving family leave.

She emphasized Donald Trump has been able to make progress where others have failed.

“Don’t kid yourself, things that seem common sense — people come out of the woodworks and they tell you all the reasons,” she added. “Bureaucracies are fascinating because trying to do anything, it’s like turning a tanker.”