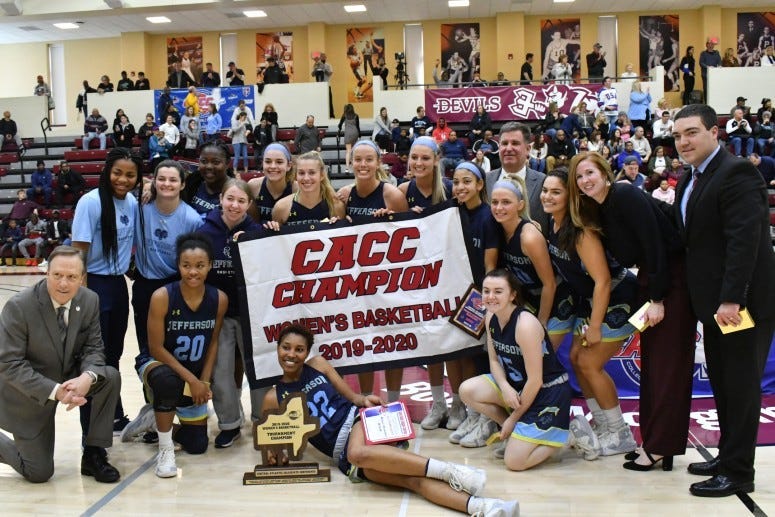 PHILADELPHIA (KYW Newsradio) — For the third straight year and fifth time in the last six years, the Jefferson University women's basketball team is headed to the NCAA Division II Tournament. The champion of the Central Atlantic Collegiate Conference, the Rams are the #8 seed in the East region and they will visit top seed Adelphi in the first round on Friday night.

While getting to the tournament has become commonplace for Jefferson, the path they took to get there this season was truly extraordinary. At the end of January, the Rams were languishing at 8-11, and they had won back-to-back games just once to that point.

Since the calendar turned to February, though, the Rams haven't lost and they will bring a 12-game winning streak into the NCAA Tournament.

"This is probably the best season we've ever had in terms of expectations/early performance/final result," Jefferson head coach Tom Shirley told KYW Newsradio. "Last time we lost was late January at (University of the) Sciences, and ironically we go back there to win the conference championship. There was a stretch where we were worried whether we were going to get into the (conference) tournament. So it's been great. The freshmen have blended with the upperclassmen, who have led the way."

The Rams have star power in senior guard Alynna Williams. A 5'2" dynamo of a guard, the Plymouth Whitemarsh product averages 19.9 points per game while shooting 38% from three.

"She's had a historical, magical career," Shirley said. "This year, being the lone (starter) back from a 29-3 team, she really had to help manage it, help be a captain, help be a big sister, help be an aunt and I think she did all those things very, very well in conjunction with me and working together. She literally did put us on her back. She had two or three 30-point games."

Shirley said the Feb. 18th Georgian Court game was a turning point for the team.

"(Williams) had two points at halftime. In not so many words, I told her that we can't win the game if you're going to score two points. She scored 28 in the second half. When you have someone leading, not with just their words, but their actions, I think everyone wants to follow," he said.

It was a 82-76 win where Jefferson rallied from an 18-point third quarter deficit.

The Rams will have their hands full with the Adelphi Panthers, who are 27-3.

The Division I transfer is Leonie Edringer, who previously played at Boise State.

The winner of this game will face the winner of University of the Sciences and Molloy in the second round on Saturday.

Jefferson and Adelphi get underway at 5:00 p.m. on Friday night.