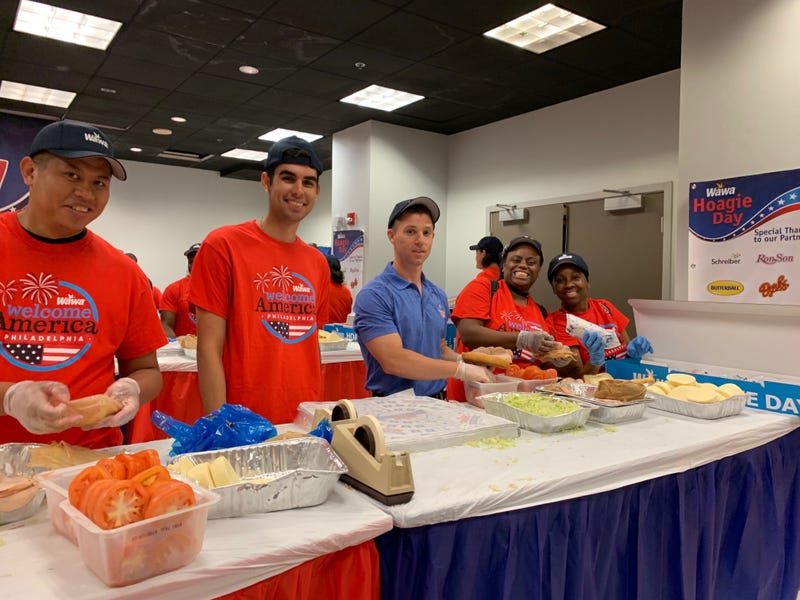 It's Wawa Hoagie Day, part of Philadelphia's ramp up to the July 4 holiday.

This is the 27th year the company has provided thousands of free hoagies to Philadelphians, and they seem to have the process down to a science. It takes Wawa employees willing to volunteer some of their time, a DJ to provide the soundtrack, a couple of mascots to keep morale high, and a few hours of labor. Workers started sandwich construction at 5 a.m., making their way through through 18,000 lbs. of ingredients.

They got up in the middle of the night and started making 32,000 hoagies at 5am, but you would never be able to tell by the mood and energy of these Wawa associates at the @ConstitutionCtr this morn@KYWNewsradio pic.twitter.com/Kb6YTm236K

Those hoagies will be marched from the Constitution Center to the lawn on Independence Mall by Wawa employees, military service members, and Independence Mall's most recognizable historical re-enactors.

The main event includes a performance by the Federal Brass from the U.S. Army Field Band, hoagie-building contests, and of course thousands of Philadelphians queueing up for a few hours for free workday hoagies.

It's a lot of work, but Morey says it's all worth it, consdering the men and women at the heart of the event.

"Our veterans, our current military, police, fire, the USO — that's what this is all about. It's about those that protect our freedom, to celebrate them," he said.

Hoagie Day is part of Wawa Welcome America celebrations, which culminate with the big party and performances on the Benjamin Franklin Parkway on Thursday.