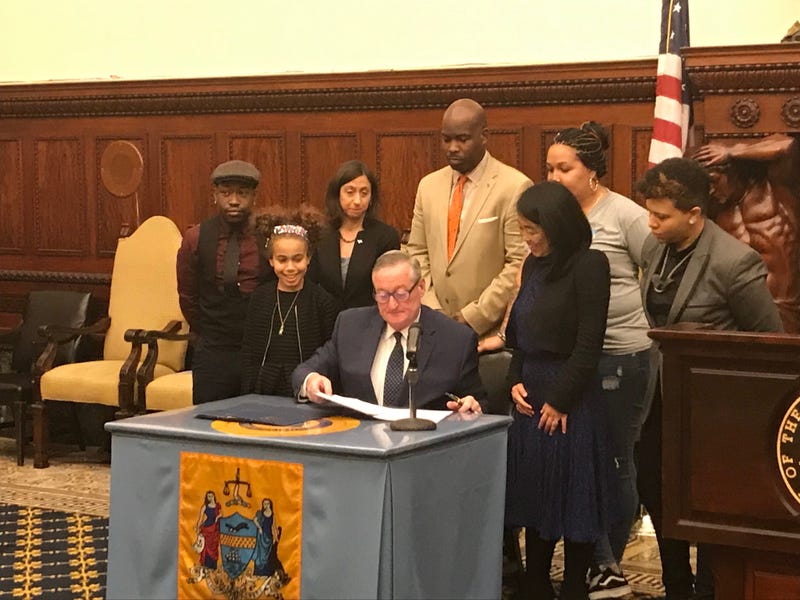 PHILADELPHIA (KYW Newsradio) — Philadelphia is taking a major step toward protecting the rights, and promoting the fair treatment, of transgender and non-binary youth.

This step comes in the form of three bills signed by Mayor Jim Kenney on Thursday. The legislation guarantees that, starting next year, all the city's buildings will have at least one gender-neutral bathroom, and youth organizations like schools, sports clubs and recreation centers will implement nondiscriminatory practices for the LGBTQ community.

According to Kenney, the bills will help protect the youngest and most vulnerable members of the LGBTQ community.

"The bills are a testament to the city's continued commitment to centering the experience and safety of transgender, and gender non-conforming people," he said.

"I'm ecstatic, being a Philadelphian, being someone who went to school here and was a trans teen here," she said.

Sanchez, who works with the ACLU's Trans Justice Program, says the signing of these bills in Philadelphia is a good start.

"It's also setting a tone for the state," she said. "We currently don't have any explicit protections statewide."

"While we are proud of these achievements, we know there is much more we must build on and accomplish, and we are dedicated to meeting that challenge."

Itzela, a non-binary 10-year-old who helped champion those bills in City Council and who was present at the signing, says they are one of those young people who will benefit from the guidelines.

"It makes me feel really good to know there will be more support out there for people like me," they said.

They're hoping the new laws can make life better for other young Philadelphians.

"Some people don't have their families who really understand it, and it's nice to have a place, even if it's not at your house," they said.