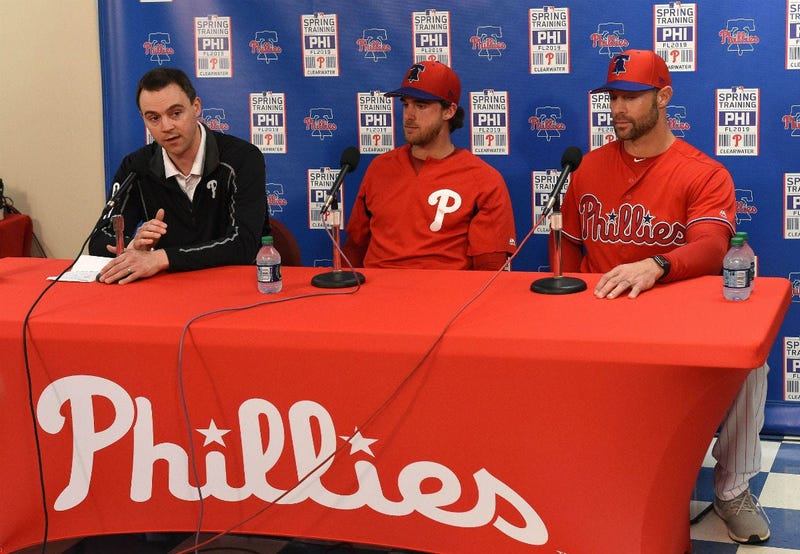 PHILADELPHIA (KYW Newsradio) — A lot of Philadelphia fans will be disappointed if superstar free agents Bryce Harper or Manny Machado don’t land with the Phillies. In fact, some will go as far to call the off-season a failure.

“I want to try to temper or manage the message or temper the notion that a failure to sign one these big free agents renders this a bad off-season,” Klentak said Thursday at the Phillies spring training complex in Clearwater, Florida. “We’ve had an objectively excellent off-season, in my opinion.”

The Phils have had a very good off-season. They traded for arguably the best catcher in the game in J.T. Realmuto, as well as a top-notch shortstop in Jean Segura. They signed former outfield MVP Andrew McCutchen, as well as upgraded the bullpen, most notably with “Houdini” right-hander David Robertson. And most recently, Klentak avoided arbitration with staff ace Aaron Nola, agreeing to a team-friendly four-year $45 million dollar deal.

That being said, Harper and Machado are generational players who won’t only increase the Phillies' chances to make the playoffs and go on a run, but also put people in the seats, which was a major issue last season, despite being in first place for a good portion of the season.

It’s no secret both players are seeking record-setting deals, which shouldn’t be a problem for Phillies ownership, led by John Middleton, who aren’t opposed to spending what Middleton called “stupid money” in an interview with USA Today. That being said, Klentak isn’t sure if it’s all about the “Benjamins.”

And it’s that mystery that’s leaving some fans with an uneasy feeling that Klentak, while he has had a nice off-season, won’t land the big fish in the pond that is free-agency.

When will this uncertainly come to an end? Jake Arrieta didn’t sign with the Phillies until March last year. The wait continues until one of these players budges. Arrieta and Rhys Hoskins believe one of those guys will be a Phillie, but until that happens, who knows?

“It’s not like we’ve been sitting on our hands,” Klentak said. “We’ve been spending. We’ve been making trades, so we’re plenty willing to make the commitments when the time is right. Takes more than one party’s willingness to do that.”