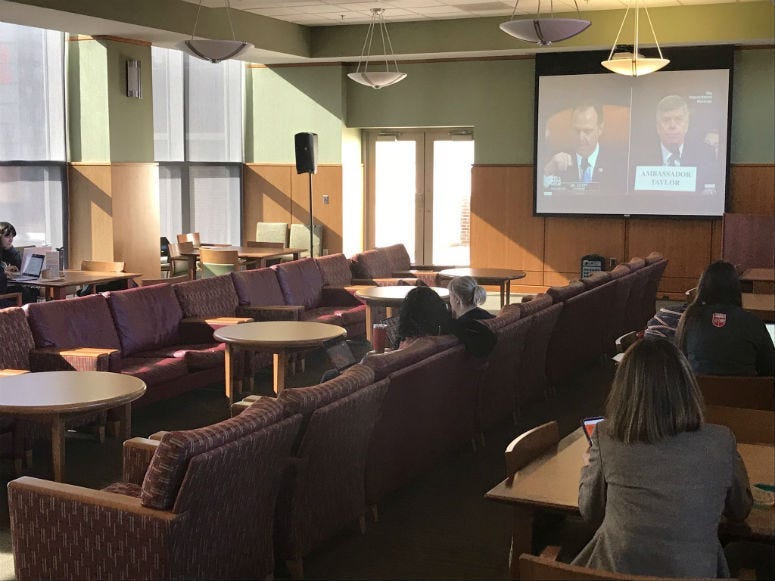 CAMDEN, N.J. (KYW Newsradio) — A New Jersey university is encouraging students to educate themselves on the potential impeachment of President Trump by holding special viewings of the impeachment hearing.

For Stump, who wants to go into public interest law, the hours of testimony gave him insight into issues he's previously only read about.

"There are things that I am learning in my classes that are then being just laid out bare in front of America. I'm realizing how much more I can understand, how much more perspective I can get when professors are next to me watching this, and also other law students, and then the discussion that can come out of this is a lot more complete, shall I say, because I am in a legal space," he added.

"It's good to kind of pop in and see what's going on," she added. "How they're structured, especially going into the legal profession."

For Stump, being able to watch Deputy Assistant Secretary of State George Kent and top U.S. diplomat in Ukraine William Taylor testify helped give him a lot of perspective into the issue of whether or not Trump withheld military aid to Ukraine to pressure its leaders to investigate his Democratic rivals, including former Vice President Joe Biden.

Students were able to talk among themselves and to professors about questions or issues they had with the hearing.

"We're not necessarily looking at it from a political side, we're more so taking all the facts and how all the facts go into the big picture. As law students you're kind of analyzing things in a different way," Davis added.