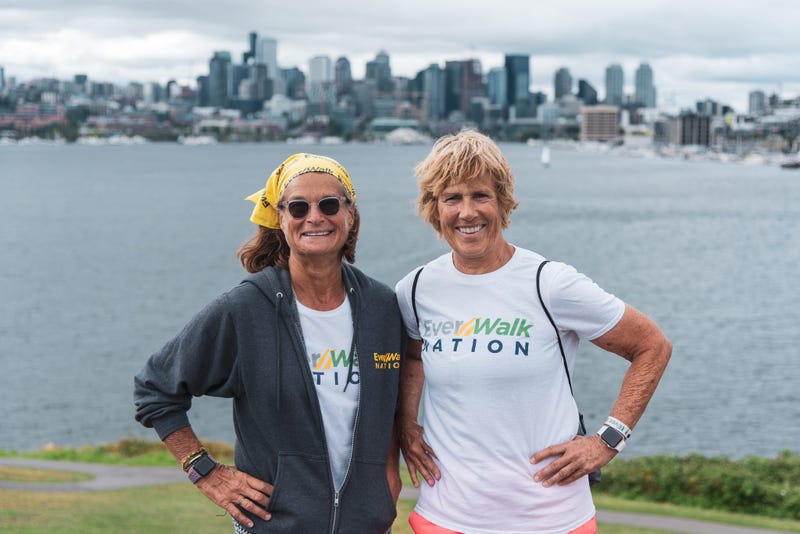 PHILADELPHIA (KYW Newsradio) — Diana Nyad made history in 2013 when she swam the epic span from Havana to Key West. Since then, she created a way for others to reach long-distance milestones — on land.

Nyad and her partner, Bonnie Stoll, launched EverWalk, a long-distance walking movement designed to get Americans off their couches and onto the street.

"We, the human race, walked from Africa to Europe. So if you go all around the world, people walk — and Americans don't," she said. "The thrust of EverWalk Nation is to turn our country into a nation of walkers."

The EPIC Walks, as they're called, often cross several states and hundreds of miles, encouraging walking as a way of life.

The latest one, the Liberty Walk, started in Philadelphia Monday. About 60 people are walking the 134-mile trek from Philly to Washington, D.C., over the course of seven days. They cover roughly 20 miles a day.

Patti Sears from California is walking her third EPIC.

"It's not a race," she said. "It's a chance to get out there and see the scenery, see the sites, and walk and talk and meet people from all over."

Nyad echoed Sears, adding that it's all about endurance and self-exploration.

"A lot of people are about my age. I just turned 70, and that group — if you look around, some younger, some right on my age, some a little older, very few very young," she said. "We are at a state of life of contemplating: What is it all about and how much time do we have left? And we better get going doing it."

A preview of our Day 1 achieve on our Liberty Walk! We can’t wait to see all of the #Everwalk family!