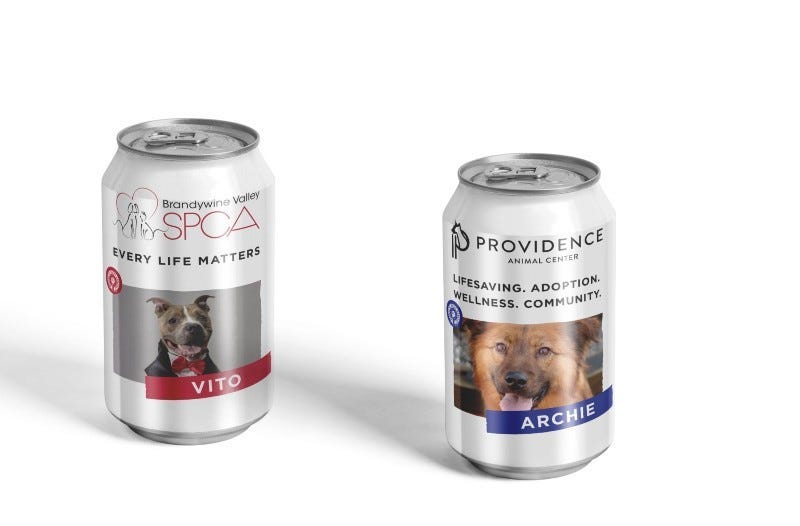 PHILADELPHIA (KYW Newsradio) — An Allentown meadery is putting faces of shelter animals on cans of its honey-based alcoholic beverage to raise awareness and funds for two Philadelphia-area animal rescues.

The Providence Animal Center in Delaware County and the Brandywine Valley SPCA gave pictures of animals up for adoption to the Colony Meadery in Allentown, to put on cans of mead.

"Providence gave us three dogs and a cat and Brandywine gave us four dogs," said Spike Eskin, brand manager of KYW Newsradio's sister station, Sportsradio 94 WIP. "We put them on the cans and we put the shelter's logos on the cans and their mission statement."

Eskin is also an animal lover and among those behind the effort. Colony has been promoting its session mead cans on Spike's 76ers podcast, "The Rights To Ricky Sanchez," for a couple of years.

"This year, they were saying, 'We want to do one around playoff time. Do you have any ideas?'"

Borrowing the ideas from a couple of breweries, Rescue Mead was born.

Eskin said the shelters were also asked to provide pictures of their longer-term residents. "And when I say older dogs," he explained, "you're talking anything between four and five years old. Your 10-year-old dogs are, of course, harder to place. So these animals that are in shelters, oftentimes they have good dispositions and are wonderful animals, but they get ignored because they are a little older and they have been there too long."

A portion of proceeds will go to the two shelters. The Colony Meadery will offer the mead online starting March 16.