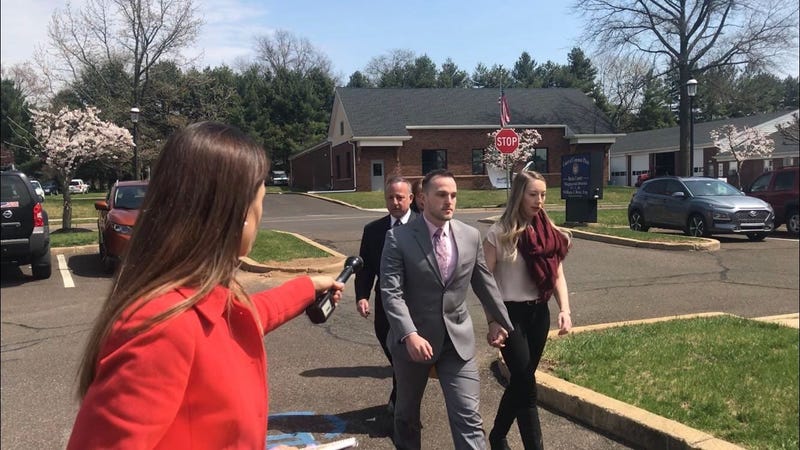 NORTHAMPTON TOWNSHIP, Pa. (KYW Newsradio) — The man accused of sexually assaulting a waitress at his own wedding reception has been ordered to stand trial on all charges, including indecent assault and false imprisonment of a minor.

Matthew Aimers' wife held his hand on the way into his preliminary hearing in Northampton Township Thursday. He allegedly sexually assaulted a 17-year-old waitress at their wedding reception last November at the Northampton Valley County Club in Richboro.

According to police, the accuser said while she was working at the wedding reception, the groom asked her to make out. Later that evening, she said Aimers cornered her in the women’s bathroom, exposed himself, tried to unbutton her pants, and rubbed up against her.

"My client walked in with his wife on his arm. He walked out — she is beside him 100 percent," said Lou Busico, Aimers' attorney. "If that young man committed a crime at his reception, Dr. Phil couldn't fix this marriage. The fact she’s with him tells you he’s an innocent man."

Matthew Aimers, accused of sexually assaulting a waitress at his own wedding, arrives for a preliminary hearing, holding hands with his wife. @KYWNewsradio pic.twitter.com/YwCY69PXL7

At the request of prosecutors — and despite the objections from reporters — the magisterial district judge, William Benz, closed the courtroom.

After the hearing, Bucks County District Attorney Matt Weintraub, who was not at the hearing, issued a statement acknowledging the request for privacy.

"We had good intentions," said Weintraub in the statement, "but this was an error in judgment. This request was an overreach on our part to accomplish the goal of protecting the victim's identity — a goal we know the press shares in almost all instances. The transparency of the criminal justice process is paramount."

Aimers is also facing charges for trying to fight with another worker at his reception, who told him he couldn't take a drink outside. Aimers then allegedly cursed at and took a swing at a police officer.