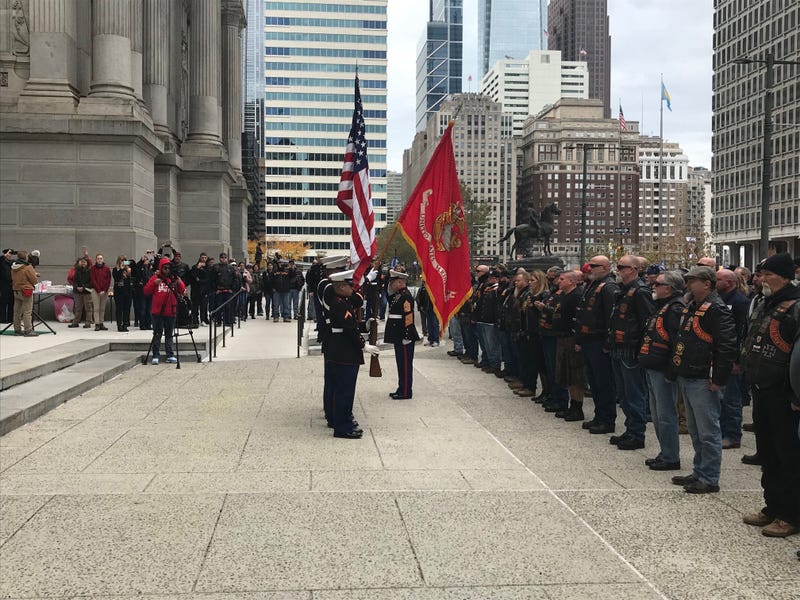 PHILADELPHIA (KYW Newsradio) — The United States Marine Corps flag was raised over Philadelphia City Hall Sunday morning in honor of the Corps' 244th birthday. This marked the start of Marine Week in Philadelphia.

The ceremony gave some veterans a chance to reflect on their service.

Sgt. William Mead spent four years in the Marine Corps. During that time, he fought in the Vietnam War.

"When I came back from Vietnam, there wasn't a thank you," he remembered. "Flags were ripped up, somebody wrote baby killer on the front glass doors."

That's a far different sight than how Sgt. Mead was greeted on Sunday when he sang the national anthem and the Marine Corps hymn for dozens of fellow Marines and civilians, during the flag raising ceremony at City Hall.

"It's heartwarming for me when folks come up and say thank you for your service," Mead said.

Cpl. Joseph Rines joined the Marines seven years ago, a decision he credited with helping change his life for the better.

"I was in a really rough place, and a lot of things had happened," recalled Rines, "so I was like, I'm going to go to the military, I might as well do it big. I might as well go all the way so I went in the Marine Corps."

Rines says his life in the Marines has been an amazing journey that has taken him to amazing places.

"We went to El Salvatore to help build schools for children," he recounted. "We did a lot of maneuvers from Michigan to Arkansas."

Rines was in the color guard for the Marine flag raising ceremony at City Hall, where dozens of other Marines assembled to show their support.

Mead and Rines both agreed the day epitomized what the Corps is all about.

"What really keeps you in the Marine Corps, keeps you going is the other Marines," said Rines. Mead spoke of the cameraderie between Marines, saying it was "everything people think that it is and more."

For both men, remembering those who served with and before them is an important part of the event.

"There are so many marines that came before us that even gave us the prestige that we could even be here," said Rines.

"When I sing," Mead confessed, "I'm singing for those who didn't come back like I did."