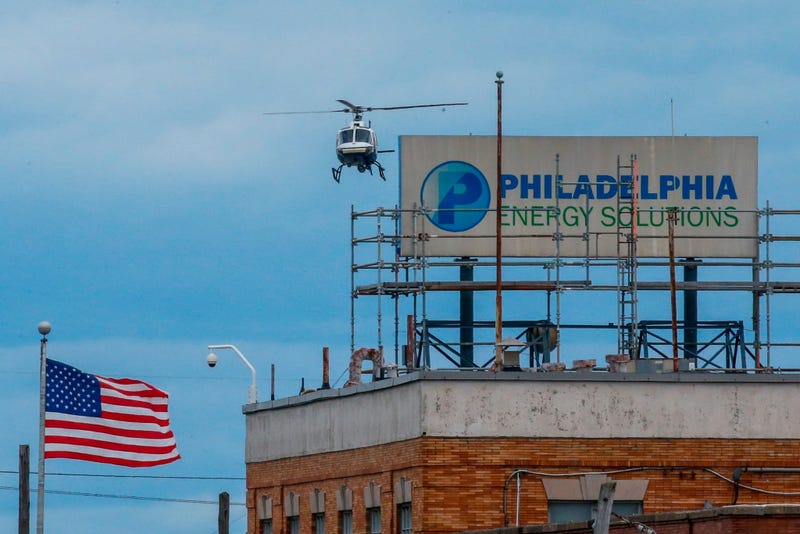 PHILADELPHIA (KYW Newsradio/AP) — Following reports claiming the South Philadelphia refinery — where a massive explosion and fire shook the neighborhood last week — may permanently shut down, the mayor has officially confirmed the news in a press release Wednesday morning.
Philadelphia Mayor Jim Kenney confirmed that Philadelphia Energy Solutions (PES) intends to shut down the refinery within the next month. He said more than 1,000 workers will lose their jobs as a result of the closure, "as well as other businesses that are dependent on the refinery operations."

Today Philadelphia Energy Solutions confirmed plans to shut down the refinery within the next month. We are disappointed by this and committed to supporting the PES workers and businesses that will be affected by this decision. https://t.co/EPmiveNO8f

"The City is committed to supporting them during this difficult time in any way possible," the mayor continued. "We will immediately convene a group of City and quasi-governmental organizations to discuss the economic and employment impacts, and what the City is able to do in response."

Reuters first reported the potential closure at the refinery, which is the oldest and largest on the East Coast. This comes after years of financial problems, in which the refinery exited bankruptcy last year. The company also slashed employee benefits and cut back on capital projects.

Citing two unnamed sources, Reuters initially reported that PES could file a notice of intent with state and federal regulators as early as Wednesday.

The amount of gasoline that will be lost from the refinery is sizable, but it can easily be made up by imports from Europe or elsewhere, said Jonathan Aronson, research analyst at Cornerstone Macro.

"We're not expecting any major shocks to retail gasoline (prices)," Aronson said. Consumers are more likely to feel gasoline prices increase due to the price of crude oil, which has been rallying in recent days, he said.

The refinery has been an important source fueling transportation in the Northeast, which is situated far from Gulf Coast refineries, and "at least temporarily, it's going to require some logistical shifting that could come at a cost," said Kevin Book, managing director at Clearview Energy Partners.

Old oil refineries on the East Coast are not always the most sophisticated or cost-competitive, so the case for their economic survival has been pretty bleak for a long time, Book said. "Refining in general is a tough business. But it's a lot tougher at one of these old, lower-complexity facilities," he added.

The 150-year-old oil refining complex processes 335,000 barrels of crude oil daily, according to PES. The refinery turns the crude into gasoline, jet fuel, propane, home heating oil and other products.

It started as a bulk petroleum storage facility in 1866, and began refinery operations in 1870.

People in the community have expressed their concerns about the air quality. City officials have maintained that the air is safe and there are no long-term negative effects on health.

Ryan O’Callaghan, president of United Steelworkers Local 10-1, which represents more than 600 workers, said he first heard about possible plans to shut down the PES refinery through the Reuters report.

He said it's "beyond a disgrace" that his workers found out about it through the media, rather than not directly from the company first.

UPDATE: Ryan O’Callaghan, Prez of the local chapter of the United Steelworkers Union, says PES asked to meet with the union at noon, no specifics given. Says if the Reuters report is true and they find out about job losses through media it’s, “Beyond a disgrace.”

He said he received a notification that there would be a meeting between the company and the union Wednesday, but the company was not specific about what the meeting is about.

While the mayor said 1,000 workers will lose their jobs, the union argues the shutdown will actually impact around 2,000 people.

"We're gonna fight for every single job and to keep this refinery open."

Of the few workers who stopped to talk with KYW Newsradio at the refinery Wednesday afternoon, one said that he was “stunned,” and his next step was to look for a new job.

The mayor added that last week’s explosion appeared to be a financial tipping point.

"This obviously was a tragedy that we didn’t expect to happen," said Kenney. "Economically, they don’t have the wherewithal to rebuild. So we‘ we’ve got to figure out what the next steps are. I don’t know what they are."

"Philadelphia Energy Solutions made the difficult decision to commence shutdown of the refining complex. While our teams include some of the most talented people in the industry, the recent fire at the refinery complex has made it impossible for us to continue operations. We are grateful that the fire resulted in only a few minor injuries. I want to thank our employees for their hard work and dedication and to thank the Philadelphia community for their support. We are committed to an orderly process to safely wind down our operations. As part of the winddown, the company will position the refinery complex for a sale and restart."

"This is devastating news for these workers and their families. These are skilled and hardworking people who helped to prevent the fire from doing more damage. They deserve to be treated with dignity and respect by a company that has profited from their labor. I expect the company to take care of these workers first before prioritizing their own further profits."

He said his team is working on a plan to address potential negative economic impacts and provide assistance to affected workers. He said he will also ensure the refinery decommissions the plant responsibly and "no corners are cut on mitigating environmental damage.

In the meantime, AAA said drivers will no doubt see the impact of the refinery’s closure, with higher prices for gasoline.

City Councilmember Kenyatta Johnson, who represents the 2nd District, which covers parts of Center City, South and Southwest Philadelphia, said the loss of jobs was disappointing. He hopes that whatever replaces it will be environmentally friendly for people who live nearby.

"We want to make sure that it’s along the lines of some kind of sustainable energy that doesn’t have a negative impact on the residents who live in the surrounding area," he said.