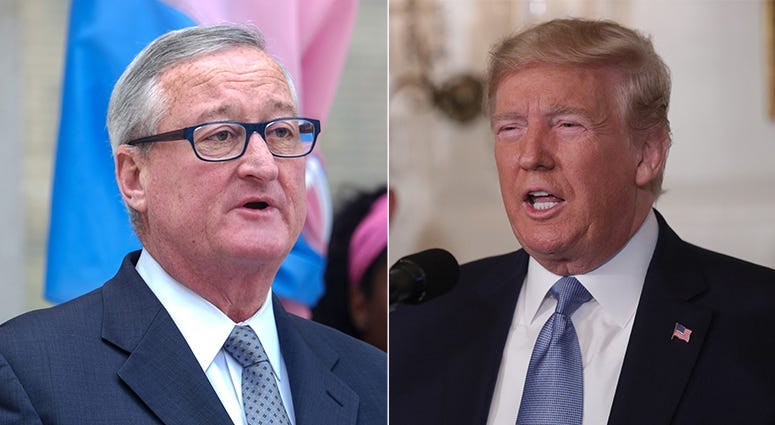 PHILADELPHIA (KYW Newsradio) — President Donald Trump's response to the mass shootings over the weekend did not go over well with Philadelphia Mayor Jim Kenney.

Kenney's dislike for the president and his policies are well-known, but he took it perhaps a step further this time. He directly blames the president for creating an environment that led to the shootings.

"His actions, his words, his manner have created an environment in this country where people feel emboldened to carry out their prejudices and hatred in violent ways," Kenney said. "All the rallies, all the things that have been said, shouted from the audience, all the things he smilingly responds to is all an imprimatur that this kind of thought and this kind of action is OK."

During a press conference Monday morning, Trump emphasized the need for Republicans and Democrats to come together on legislation for stronger background checks.

He condemned the El Paso and Dayton mass shootings, adding, that "our nation must condemn racism, bigotry and white supremacy."

"We have done much more than most administrations," he continued, without elaboration. "We have done actually a lot. But perhaps more has to be done."

Kenney said there's a simple step on the path toward a solution.

"He has to stop speaking the way he does and he has to stop doing the things he does that are just mean-spirited and clearly racially driven and an embarrassment to this country worldwide," he said.

Kenney shared his take on the president after a news conference at City Hall Monday, where he denounced the Trump administration's plan to cut refugee admissions from 30,000 — already a historic low — to zero next year.