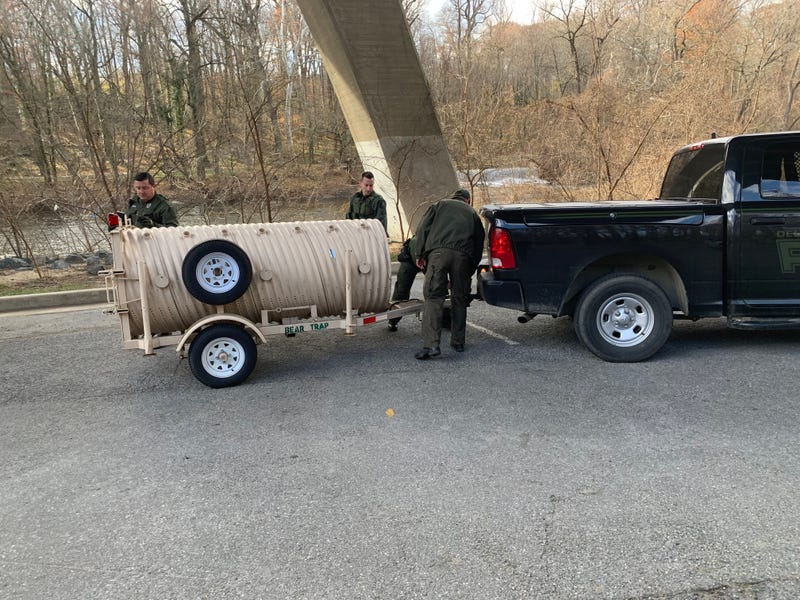 BRANDYWINE PARK, Del. (KYW Newsradio) — The Pennsylvania Game Commission is assisting the Delaware Fish and Wildlife Natural Resources Police in the hunt for a bear seen roaming around Wilmington on Thursday and along I-95 earlier on Wednesday.

Pennsylvania Game Warden Jerry Czech who joined pursuit and saw the bear says he believes the 200-pound black bear is likely the same one that was spotted in Delaware County the past few days.

He says they have transferred a non-lethal bear trap from their state vehicle to the Delaware Natural Resources vehicle.

Delaware Natural Resources game officers connect a bear trap lent to them by a PA Game Warden to catch the elusive black bear that made its way into Wilmington this morning.@KYWNewsradio pic.twitter.com/D7VdRMreF9

The plan, according to Brian Pollock of Delaware team, is to lure the bear to the trap with bait near the Pennsylvania/Delaware border.

That bait? Day-old donuts and chocolate.

Authorities say the animal was hit with a tranquilizer dart, but it appears to have brushed off the dart and has moved further intotthe woods since its earlier jaunt in the city.

Police and game officials were closing in on the wayward animel in the Trolley Square neighborhood in Wilmington, as it was running through yards and jumping fences.

No idea where the bear is now, but this is from earlier inside a coffee shop at 14th and DuPont in Wilmington. Officers scrambled when there was word of any movement. pic.twitter.com/9v1jrg2v9w

The bear caused commotion when it was seen at 14th and DuPont streets, and authorities ordered reporters and pedestrians to take cover indoors.

Chris, trapped in a cafe with a KYW Newsradio reporter, said he saw the bear while getting his morning coffee.

"The bear looked like he was in the parking lot off 14th Street. And then he ran across DuPont Street, ran down the sidewalk on DuPont street, and dove into the back yards."

Delaware State Police say there were three bear sightings on Wednesday between 3 a.m. and 7 a.m. near the Pennsylvania/Delaware border in the North Wilmington Area.

The first was near the I-95/I-495 split, and then again at Manor Avenue and Philadelphia Pike, and the third was along I-95 at Concord Pike.

On Manor Avenue, where there's a school, bank and cheesesteak shop on one side of Philadelphia Pike, and shops and an apartment complex on the other, Suzane Crist-Smith waits for a bus.

"Very unique for this area," she said. "It kind of scared me, because I walk home in the dark, and I’m like, 'What do I do?' I carry my pepper spray, but it's not gonna do any good with the bear."

Czech, who would very much like to answer that question, told CBS 3 that the animal is looking to eat.

"When it gets into a populated area, there are a lot of dumpsters, so it's like a buffet for a bear," he said.

So, he says, it's time to seal up those trash cans, or keep them indoors until it's time for them them to be picked up.

Officials urge people to call 911 if they see the animal.