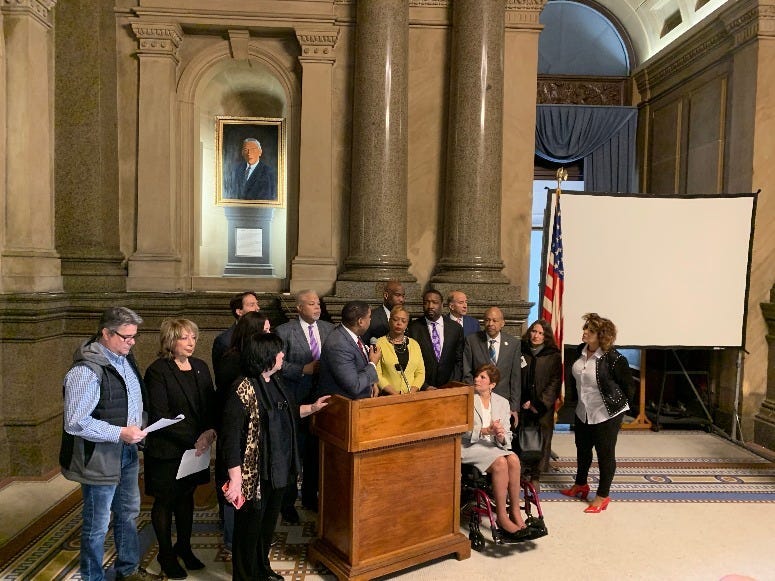 PHILADELPHIA (KYW Newsradio) — Pennsylvania lawmakers promised legislation in Harrisburg that would make it harder, if not impossible, to open a safe injection site in the state as fallout continued from last week's short-lived effort to open a site in South Philadelphia.

The bills were announced Monday at a city hall news conference, where South Philadelphia residents joined a dozen legislators and City Councilmembers.

"The process needs to include people and be fair," said State Sen. Anthony Williams, sponsor of SB 933, which would require three public hearings and legal authorization from the local government for a site to open.

State. Rep. Maria Donatucci says she will introduce a companion bill in the House.

State Sen. Christine Tartaglione says she'll introduce even tougher legislation that would ban the sites in Pennsylvania, though she did suggest she might be willing to make an exception.

"Mayor Kenney, Gov. Rendell, put it next to your home," she said.

Kenney and Ed Rendell are supporters of the sites and criticized the proposed legislation.

Rendell, however, said he regrets not holding a public hearing before announcing the plan to open a site at Constitution Health Plaza.

"We didn't have it because we believed if we got it up quickly and people saw how unobtrusive it was — how it was entirely inside, no shooting up on the street in front of children, no trash in the street, no defecation on the street, no dirty needles — that people would understand there was very little harm to it," he said. "But we should have had a public hearing."

Kenney agrees but maintains support for the sites.

"The effort to introduce Overdose Prevention Sites is about saving the lives of individuals suffering from substance use disorder, and this legislation attempts to criminalize this effort unless a certain political process is followed and approved," he said in an emailed statement. "While we support the need for additional community engagement, the reality is that if we are to consider substance use disorder the disease that it is, we must allow opportunities for those suffering to come out of the shadows so that we can ensure they live long enough to get better. Overdose Prevention Sites will not solely resolve this crisis, but I would implore elected officials to talk to people who have lost loved ones to this disease, and be willing to look parents in the face and say they opposed this when it could have possibly saved their child’s life."

Ronda Goldfein, vice president of the nonprofit Safehouse, which would operate the site, said she was saddened by the " stigma-laden legislation that doesn’t help our neighbors who are struggling with opioid use. Our elected officials should be helping to save lives instead of putting up obstacles."

Rendell said Safehouse would continue to pursue creating facilities for drug users to inject under medical supervision in an effort to reduce Philadelphia's high number of overdose deaths. He said they may outfit RVs and do mobile sites.

"The judge has ruled it's legal. It is legal and I don't think there's any way it can be stopped by legislation," he said.

As for Tartaglione's suggestion that the site go next to his house?

"If there were a significant number of people dying of overdoses in East Falls, I would not object to having a safe injection site in my neighborhood," he said.