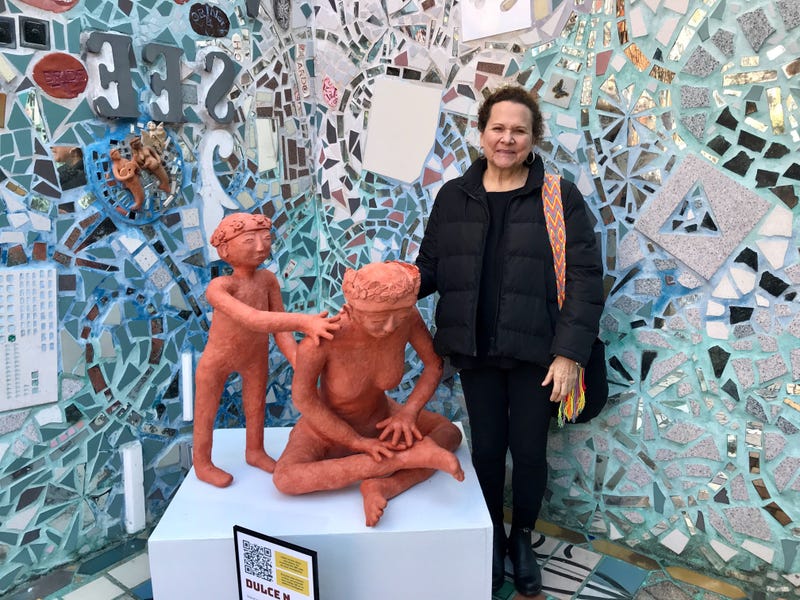 PHILADELPHIA (KYW Newsradio) — One of the most popular tourism spots on South Street, Philadelphia's Magic Gardens, has partnered with a local nonprofit to produce an immersive art exhibit that sheds light on immigrant stories.

The temporary exhibit is called Vidas Suspendidas, or Suspended Lives, and features "self-portrait" statues by nine Latinx artists spread out around the massive 3,000-square foot space. The project was created in partnership with Puentes de Salud, a wellness nonprofit for Philly's Latinx immigrant community, and runs through November 18.

"It's very emotional for us," explained Emily Smith, executive director of Philadelphia's Magic Gardens, "because it's our friends and our family members and the people that we love that are affected by this."

It's also emotional because every artist tells their personal journey of being a Latinx immigrant in the US. Visitors can listen to each story by scanning the QR code at each statue.

"And even people that don't think they are affected by this are," said Smith. "Being able to give a moment for our visitors to contemplate that, and hopefully to get people to listen to other peoples stories is what we're hoping to do here."

Lead artist Nora Litz, of Puentes de Salud, said their goal is to bring light to the invisible stories of the Latinx immigrant community she serves.

Visitor Maria Schatzman said it was a learning eperience for her.

"You think about the people coming to the country," she said, "but you dont know what happens once they're here, the struggles that they face and how ongoing it is."

Though the stories of fear, trauma, uncertainty, and abandonment are not easy to listen to, Litz said at Magic Gardens, they're safe.

"The way they're embraced here at Philadelphia's Magic Gardens," said Litz, "it's like they belong here, they're protected here."