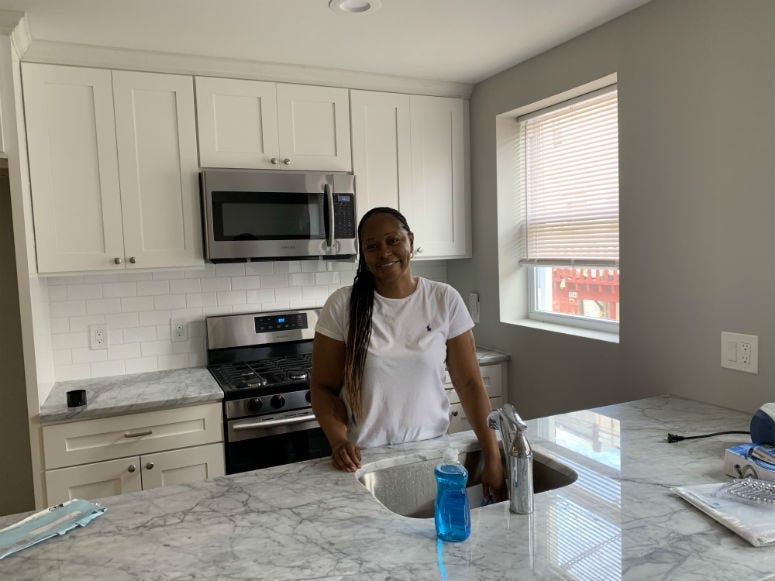 PHILADELPHIA (KYW Newsradio) — Philadelphia's expanded program to help first-time homebuyers is off to a running start. In its first month, more than 100 people have used the program to become homeowners, and the process is proving surprisingly easy to navigate.

Six years ago, Angela Kraddock was homeless. Last month, she bought her own home.

She remembers distinctly when she became determined to own her own home.

"It was March the fourth, 2013. I was homeless on the street. I was tired of being homeless," she said.

Kraddock turned her life around and spent years saving every penny from her housekeeping job at Jefferson.

Her stunning turnaround involves recovery, hard work, discipline and drive, but for the final hurdle — the actual home purchase — she gives a nod to the Philly First Home program.

Kraddock was one of the first people to take advantage of a grant — up to $10,000 — for first-time buyers buying in Philadelphia and making under 120 percent of the area median income who have completed housing counseling.

Kraddock worked with Affordable Housing of Pennsylvania. On her first visit, her credit score put a mortgage out of reach, but they gave her steps to restore it.

"I did everything they told me to do. So they pulled my credit report again a year later and everything was done," she said.

"I took the class, I had my little notebook, I wrote down everything they told me to do."

Her counselor, Ken Bigos, says many clients like Kraddock fix their credit and earn the income to make mortgage payments but still can't buy.

"The biggest barrier associated with home purchase is down payment and closing costs," Bigos said.

That's why the grant is so crucial.

It comes from a special pot within the housing trust fund, financed with $19 million from taxes on properties coming off the 10-year abatement.

Bigos says the increased income limit has generated many more clients getting counseling to qualify.

He says his agency's been inundated since the program launched.

"We don't want them to come back here, three to five years later, saying they are struggling to make their mortgage payment," he said.

"First-time homebuyers need a lot of hand-holding, a lot of help," Whitaker explained.

Whitaker says she specializes in first-time buyers because she believes strongly in home ownership.

Philadelphia's healthy homeownership rate dropped some in the housing crisis, so City Council created Philly First Home to reverse the trend and keep it affordable in the face of gentrification.

For Kraddock, it was the key to her dream home.