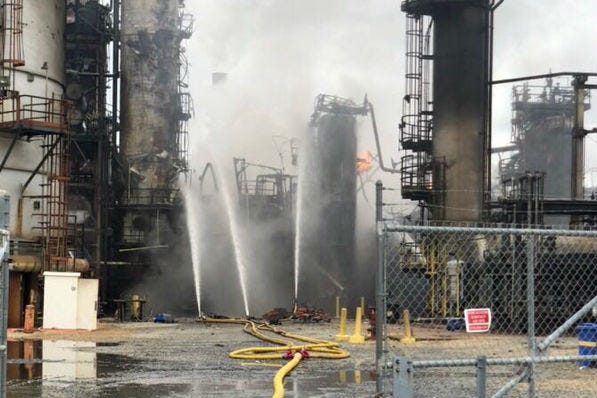 PHILADELPHIA (KYW Newsradio) — An early morning fire at a 150-year-old refinery complex in South Philadelphia has been contained. There have been no reports of injuries or evacuations. This is the second fire at the refinery in the last month, following a June 10 fire in which no injuries were reported.
Witnesses reported the first of two explosions around 4 a.m.

Just witnessed this explosion heading to Philly airport.. praying no one was hurt pic.twitter.com/S0fcN50HaT

Deputy Fire Commissioner Craig Murphy said the fire is contained but it is not yet under control, and fire crews are making sure the fire does not spread.

He said a vat of butane caught fire. A series of smaller explosions happened as the fire worked its way through the tangle of pipes carrying fuel across the complex.

It is not yet clear what caused the initial fire. PES fire crews already on scene began operations to cool down the vat and isolate the fire. They are working to cool other tanks in the surrounding the area as well.

Update: a tank filled with butane exploded and while deputy chief Craig Murphy says the fire is contained to that vat, the fire is not yet under control. There is no danger to the public. Shelter in place request has been lifted pic.twitter.com/ncIGZMiYf1

Shortly after 7 a.m., the Philadelphia Fire Department lifted a shelter-in-place request for the area bounded by 26th Street to the west, the Schuylkill Expressway to the north, I-95 to the south, and 22nd Street to the east. They advise people to continue to avoid the area near Passyunk Avenue and 26th Street to make way for fire apparatus and first responders.

The Schuylkill eastbound ramp to 26th Street is closed.

Murphy said one PES employee was complaining of chest pains. Emergency personnel assessed him and determined that he did not need to be transported to the hospital, and they are treating him on site.

He says it's very fortunate nobody was hurt because there were people working nearby.

Thick, black smoke billowed across the city when the fire started.

To address air quality concerns, Murphy said that PES sent an industrial hygienist to monitor the air outside the area. Readings they received indicate the area is clear, and there is no danger to the public. PES will continue monitoring residential areas nearby.

A fireball in the sky

The initial explosion was both heard and felt by people all over the area. Some were a little too close to the action for comfort.

"And I was about ready to pull out my phone and record the fire, and then a second explosion goes off, and I felt the heat coming off of that thing. And it was so ... so powerful," he said.

Eventually cops made him and others leave the area.

Here’s the view of the refinery fire at 530am, about an hour and a half first explosion. Those pillars of smoke were easily visible from 95 @KYWNewsradio pic.twitter.com/OeXmHHdsqX

Another witness, Bob, was much closer to ground zero, working in the produce distribution nearby. At first, workers there thought the explosion was maybe thunder or a truck. But Bob says they figured out what it was and went outside just as the second explosion happened.

His reaction was one likely shared by many others.

But instead of taking off, Bob says that workers stayed put, at least for a little while.

Bob and everyone else down in the area of the refinery were able to evacuate safely without any injuries.

Scarlett Rowe of Collingswood was driving his wife to the airport at around 4 a.m. with their 6-year-old daughter in the back seat. Shortly after crossing the Walt Whitman Bridge, he says they saw, heard and felt a massive explosion.

"Instantly the heat from the explosion just permeated the car," he said. "I mean, I had the AC on in the car, and the temperature in the car went from, like, 70 to 95 in a matter of, like, .5 seconds. It was crazy."

At the same time, Patrick Carmona was driving a tractor trailer northbound on the bridge when he saw the blast.

"That fire ball was huge. Just like a big movie explosion, where they want a lot of fire, not much smoke or anything, no clouds. It was a huge ball of fire," he said.

Kelly DeLeon said she looked up and saw fire in the sky as she drove across the Passyunk Avenue Bridge.

"When it exploded, it was shaking the bridge," she said. "So, I got off the bridge, because one thing's for sure: I didn't want to end up in the water in my car. Because that's what I thought would happen. It rattled so bad. And then I just got out of Dodge."

Philadelphia Energy Solutions says it is the largest oil-refining complex on the Eastern Seaboard.

KYW Newsradio's Dan Wing and Paul Kurtz, and the Associated Press, contributed to this report.
Stay with KYW Newsradio as this story updates.