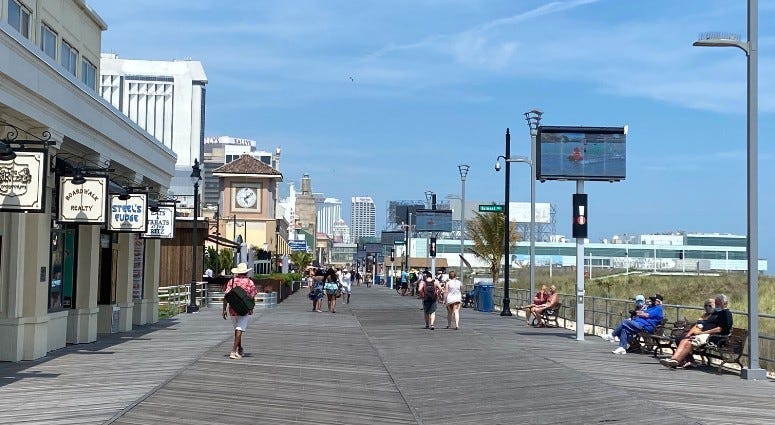 “We want to help out the people that are in business,” he said. “We want to use our judgement and issue this executive order to help our bars and restaurants.”

He called this a “small step” in helping establishments that haven’t been able to fully take advantage of the summer boom yet.

“We’re here to support you,” Small added. “We know that it’s been a tough road and this is something no one could have predicted.”

This won’t be one big free-for-all though — there are guidelines that go along with this order.

For starters, there will be open container zones, which include a 2-mile stretch of the boardwalk between Sovereign Avenue and Rhode Island Avenue (or right around the Tropicana to right around the Ocean Casino Resort).

You can also have drinks in your hand in the non-residential area of Gardner’s Basin on the waterfront, as well as along the Orange Loop, which consists of many bars just off the boardwalk on Tennessee Avenue, New York Avenue and St. James Place.

“I think it’s a great addition to the city, a great addition for the bars to up their sales,” said Jason Rello, assistant manager of Bourre, one of the Orange Loop Bars. “People can now legally (drink) on the boardwalk, so it’s less pressure on the cops to try to stop people or ask what’s in that cup.”

He said Orange Loop bars even plan to join forces this weekend for an open container party, although those details haven’t been ironed out yet.

Thomas Stafford, who works at the Biergarten, thinks this order should help make up for lost time.

“I think it’ll help definitely put a dent in the losses and that’ll help stem the bleeding a little bit,” he said. “For a lot of businesses around here, it’s about survival, it’s about making sure we make it through this year.”

Some other rules include selling only one drink at a time to a customer, and the drink has to be purchased at an establishment in the open container zone.

Customers will be given a plastic cup that has their logo. All cups have to be 16 ounces or less.

Outdoor dining is allowed down the shore and all throughout New Jersey starting Monday.