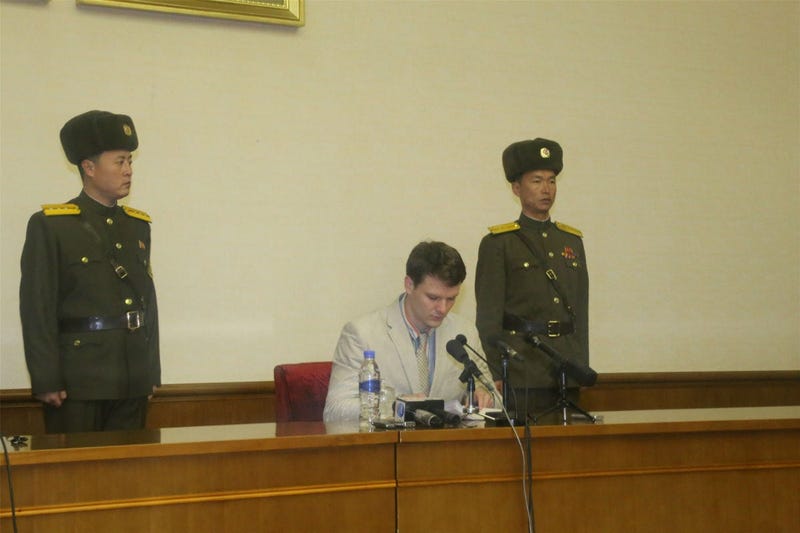 By Veronica Stracqualursi, CNN
(CNN) -- The family of Otto Warmbier rebuked President Donald Trump on Friday for siding with North Korean leader Kim Jong Un, who denied knowledge of their son's maltreatment during his imprisonment.

After a second summit with Kim in Vietnam, President Trump said Thursday he does not hold the North Korean dictator responsible for Warmbier's death.

READ: Trump accepts Kim 'word' he had no role in Warmbier death

"He tells me that he didn't know about it and I will take him at his word," Trump said during a news conference, also claiming Kim "felt very badly. But he knew the case very well, but he knew it later."

Otto Warmbier was a University of Virginia student when he was detained in January 2016 during a brief sightseeing tour of the reclusive state. He was held captive by the North Korean regime for over a year, before being released back to the US in June 2017. Then 22 years old, Warmbier returned home to Ohio in a vegetative state -- blind, deaf, and having sustained severe brain damage from his time in detention. He died on June 19, 2017, days after the Trump administration had secured his return.

The Warmbier family was recently awarded more than $500 million in a wrongful death suit against the North Korean government.

"Of course, (Trump) holds North Korea responsible. He has deep affection and shares the grief with the Warmbier family," Conway said in an interview on Fox News' "America's Newsroom," adding later, "What the President is saying is that there's no indication Chairman Kim knew what happened to Otto Warmbier when it happened."

During his Thursday news conference in Vietnam, Trump told reporters he believed Kim's denial in part because it would not be in Kim's interest for Warmbier to wind up in a coma.

"I don't think that the top leadership knew about it," Trump said. "I don't believe that he (Kim) would have allowed that to happen."

Trump spoke of his personal relationship with the Warmbier family, claiming he knows them very well. The Warmbiers were guests of Trump at his 2018 State of the Union address and Fred Warmbier accompanied Vice President Mike Pence to the 2018 Winter Olympics in Pyeongchang, South Korea.

"I think they're an incredible family," Trump said of the Warmbiers. "What happened is horrible. I really believe something horrible happened to (Otto Warmbier), and I really don't think the top leadership knew about it."

Some Republican lawmakers and even a former senior member of Trump's national security team pushed back against the President's comments.

"Americans know the cruelty that was placed on Otto Warmbier by the North Korean regime," Nikki Haley, Trump's former Ambassador to the United Nations, tweeted. "Our hearts are with the Warmbier family for their strength and courage. We will never forget Otto."

Ohio Republican Sen. Rob Portman, whose constituents include the Warmbiers, warned in a speech on the Senate floor, "We can't be naive about what they did to Otto, about the brutal nature of the regime that would do this to an American citizen."

Susan Collins, a Republican senator from Maine who sits on the intelligence committee, expressed disbelief at the idea Kim was unaware of Warmbier's status.

"I obviously don't know what the conversation entailed, nor do I know whether Kim Jong Un came up with specific evidence to support that statement," Collins told CNN. "I personally find that statement extremely hard to believe."

Trump's whitewash ignored the tight control that Kim maintains over his country's internal affairs as its supreme leader, particularly when it comes to sensitive matters such as the imprisonment of an American citizen.

Kim oversees one of the world's most repressive regimes, one that human rights groups say includes concentration camps, starvation and carries out medical experimentation on human subjects. The UN estimates that North Korea has 80,000 to 120,000 people in its gulags.

The President's comments were also the latest instance in which he has accepted the denial of an autocratic leader like Kim at face value.

Trump has repeatedly shown a willingness to suspend disbelief when it comes to strongmen, including accepting Saudi Crown Prince Mohammad bin Salman's denial of involvement in the premeditated murder of the journalist Jamal Khashoggi and Russian President Vladimir Putin's claim his country didn't meddle with the 2016 US presidential election despite US intelligence agencies concluding otherwise.