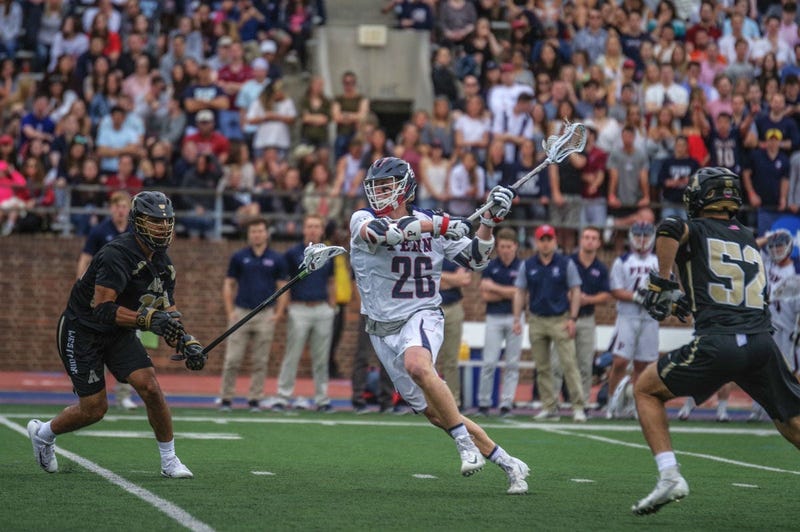 PHILADELPHIA (KYW Newsradio) — The University of Pennsylvania men's lacrosse team will face a very familiar opponent on Sunday in the quarterfinals of the NCAA Tournament.

When the Quakers, who are 12-3 and on a 12-game winning streak, take on Yale, it will be the third meeting between the two teams this season. The first two games were each decided by a goal in favor of Penn.

Now the Quakers earned this rematch by beating Army in the first round this past weekend, 13-8 at Franklin Field. It was their first NCAA Tournament appearance since 2014 and Penn's first NCAA Tourney win since 1988. The Quakers never trailed in that one, racing out to a 5-0 lead after a quarter.

"Our guys hadn't been in the NCAA Tournament in a while. Didn't know if we'd have some jitters and things like that," Penn head coach Mike Murphy told KYW Newsradio. "We came out firing on all cylinders and played well on offense and defense and certainly faced off well. I think the first quarter and the 5-0 lead was critical to us winning the game."

Penn's first win over Yale this season came during the regular season, a 13-12 triple-overtime classic back on March 30. Then the Quakers slipped past the Bulldogs to win the Ivy League title on May 5, 12-11. Murphy sees another close battle this time around.

"It's hard to envision one of these two teams kind of running away with the game," he says. "Their face-off guy is as good as there is. Ours is very, very good, as well. Their offense is good, their defense is good, and I think we can kind of say the same thing. So it's going to be a very hard-fought game and I would think a very close game that comes down to the wire again, which we've had a lot of with Yale over the last maybe four or five years."

The winner of this game advances to the national semifinals, which will be held in Philadelphia at the Linc.

Sunday's game in East Hartford, Connecticut, will get underway at 2:30 p.m.