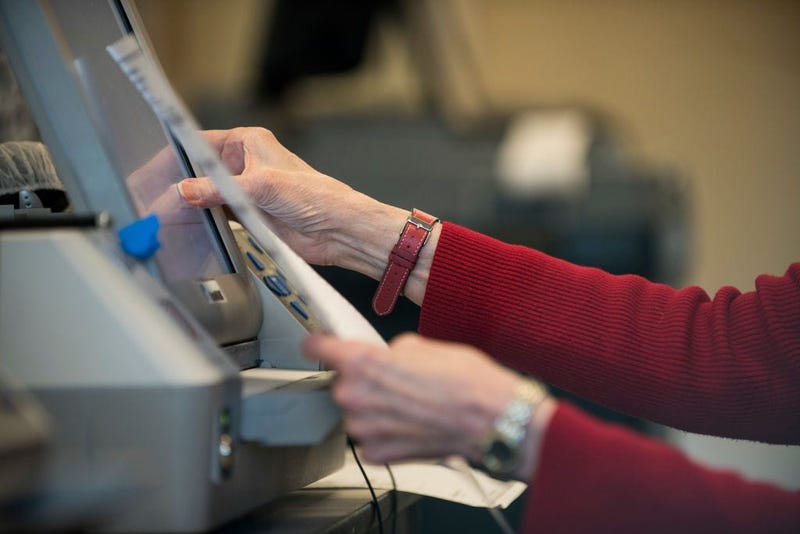 PHILADELPHIA (KYW Newsradio) — The Philadelphia Board of Elections has scheduled a special meeting for Thursday to consider canceling a $29 million contract with Election Systems & Software, or ES&S, for new voting machines, after the city controller found the company failed to disclose lobbying activity when it bid for the contract.

City Solicitor Marcel Pratt, in a letter to the board, said that, under city law, the failure to disclose the information makes the contract "voidable at the City's option," meaning the city can void or keep the contract, and the decision lies with the board.

Pratt made no recommendation but included a separate letter from Procurement Commissioner Monique Nesmith-Joyner that warned, "restarting the procurement process at this time would make it impossible to acquire and roll-out new machines, schedule public demonstrations and train election workers by the November 2019 election and unlikely to do so in time for the May 2020 Presidential primary."

She says that would place the city at risk of failing to comply with a state mandate for voting machines with paper ballots by 2020.

Gov. Tom Wolf ordered every county to get new machines by the 2020 primary, after reports of attempted hacking in the 2016 election. Philadelphia was one of the first to comply, mindful that, with a million registered voters casting ballots in more than 800 polling places, the rollout would be complex and time-consuming.

The Philadelphia City Commissioners said they did not want the machines to debut in the high turn-out presidential primary.

The process generated controversy, as citizen activists distrusted ES&S's electronic machines and clamored for hand-marked ballots. They found an ally in Controller Rebecca Rhynhart, who launched an investigation of the contract almost immediately after it was awarded.

She detailed her preliminary findings in a letter to the board.

"Our investigation revealed that ES&S used a lobbyist and engaged in lobbying activities in 2017 and 2018, including lobbying activities through direct communication with City Commissioner Al Schmidt," she stated. "ES&S also failed to disclose its consultants’ campaign contributions to City Commissioners Lisa Deeley and Al Schmidt – the very two individuals charged with the final selection of the vendors for new voting technology."

ES&S hired Duane Morris and Triad Strategies to lobby for it, a fact it disclosed to the city's Board of Ethics. In fact, that's how Rhynhart found the information.

"As soon as we were informed by the city of a potential omission in our electronic application, we immediately addressed the issue with the city’s Law Department," said ES&S spokesperson Katina Granger in an email. "The fact is our omission was due to a mistaken interpretation of Philadelphia’s contracting provisions. We have consistently submitted public disclosure filings with the city’s Board of Ethics since 2014 and inadvertently omitted them in our vendor application. Our reports were available online for anyone to view and they were the same reports obtained for the City Controller’s review. The reports disclose activities for businesses we work with, as ES&S does not make political campaign contributions."

Rhynhart is urging the board to postpone a decision until her investigation is complete.

The board would normally consist of the three City Commissioners, but Schmidt and Deeley are up for re-election in November so they have been temporarily replaced by judges Giovanni Campbell and Vincent Furlong.

Pratt says the city has already negotiated an agreement with ES&S for $2.89 million in refunds and credits if the contract stays intact.

If the board votes to void the contract, the city would have to start from scratch. Officials discovered, in the course of addressing the ES&S non-disclosure, that Dominion Voting Systems, the other finalist for the contract, also failed to disclose the use of a consultant.