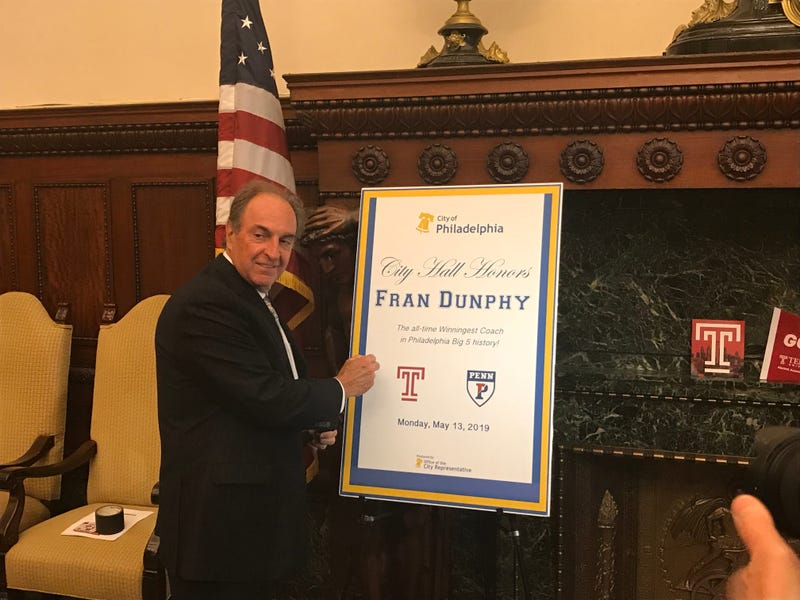 PHILADELPHIA (KYW Newsradio) — Eight Big 5 titles, 14 conference championships and 17 NCAA tournament appearances are just a few of the accomplishments Fran Dunphy achieved as head coach of men's basketball at the University of Pennsylvania and Temple University.

Philadelphia Mayor Jim Kenney honored Dunphy for his work on Monday during a ceremony at City Hall.

"He probably doesn't want to be honored, but we have to recognize and acknowledge his contribution to so many lives of young athletes throughout the course of his career and how he put them on the right road," Kenney said.

In typical Dunphy fashion, he remained humble through it all.

"Certainly, very appreciative of it," Dunphy said, "but it's certainly unnecessary. I've been honored so much over my career just by having the opportunity to coach at two wonderful institutions in Penn and Temple. That's all the honor I've ever needed."

"I've had an unbelievable run, and I'm very grateful for it," he said.

Dunphy noted he is not done helping mold young minds. He's currently co-teaching a class at Temple, and he plans on picking up another one.

"Just trying to stay as busy as I possibly can be, and actually looking forward to the unknown, as to what else will happen," he said.

Dunphy's brother, Dennis, and the new men's head basketball coach at Temple, Aaron McKie, were among those who came out to honor one of the most accomplished coaches in Big 5 history.