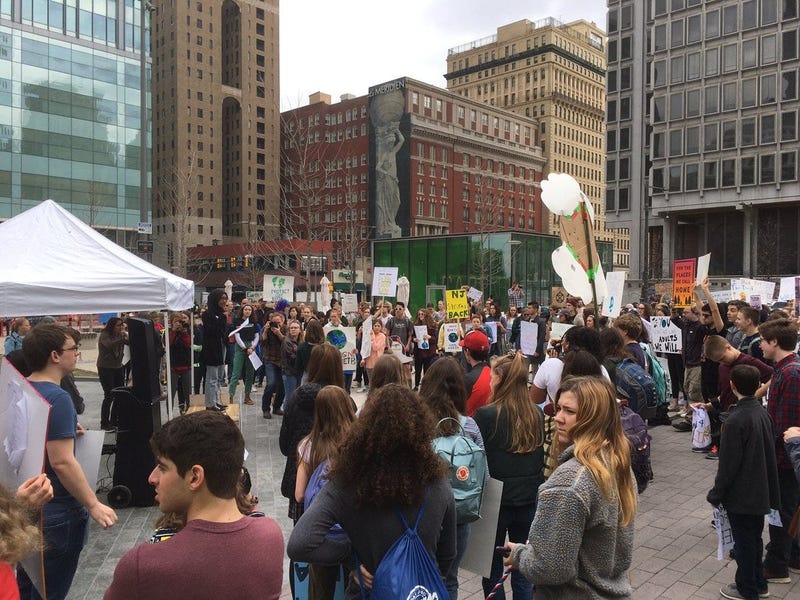 Young demonstrators from across the globe rallied for the same cause, declaring climate change a national emergency.

Philadelphia students were no exception. They participated in the youth climate strike at LOVE Park, where they protested on behalf of the Green New Deal because grown-ups — our world leaders — "have yet to acknowledge, prioritize or properly address our climate crisis."

The students say their future is at stake. They agree with a 700-page study by the United Nations Intergovernmental Panel on Climate Change that due to decades of inaction, there are just 11 years — by 2030 — to change the trajectory of the worst effects of climate change.

Philadelphia area school children - staging a Youth Climate Strike - argue if grownups are not planning for a future with climate change, what future are they even planning for. They chanted grownups have failed them on climate change. #climatechangepa pic.twitter.com/Zb89tsqlHi

"It's discouraging to have people go to school and prepare for a future that they won't have," she said, adding adults are letting the next generation down because "they're not pressuring their representatives to vote for the Green New Deal, and nobody in Congress is doing anything."

"It's our Earth. Our home. It's our duty to protect and preserve it," she added.

"I don't know specifically what I want to ultimately do in the field," she said. "But I think it would be great to be a lobbyist and evoke change."

Her classmate, 16-year-old Maxwell Leis, was holding a sign that read "Do the Right Thing," inspired by the Spike Lee film set during a hot summer.

"The globe is extremely hot right now. Hotter than it's ever been. So I'm trying to tell the people in government to do the right thing," he said.