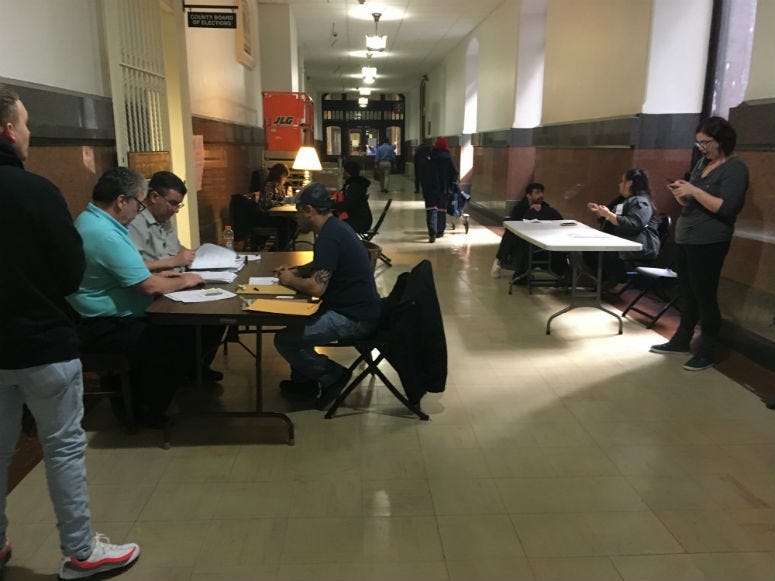 PHILADELPHIA (KYW Newsradio) — Nearly 100 people filed petitions to run for public office in Philadelphia by the time the deadline for nominating petitions passed at 5 p.m. Tuesday.

Kenney's campaign spokesman Harrison Morgan boasted that the mayor had filed 24,000 signatures and dismissed both challengers as, "corporate shills for the multibillion dollar beverage industry who want to turn back the clock on the Mayor's progressive agenda."

On the Republican side, endorsed candidate Daphne Goggins announced on Facebook she'd been unable to get the 1,000 signatures required so William Ciangaglini will be running unopposed.

"For me the blessing was being able to make history," Goggins wrote in a post Tuesday night. "I am the First Female African American Republican Mayoral Candidate endorsed by a major party in the City of Philadelphia!"

A whopping 34 Democrats, including three incumbents, filed to run for one of five ballot slots for City Council At-Large. Seven Republicans are also seeking that office.

In an unusual turn of events, most of the Democratic incumbents in district council seats have at least one challenger, several have two. The notable exception is in the Sixth District, where Bobby Henon, under federal indictment for corruption, drew no opponent.

Republican 10th District incumbent Brian O'Neill also faces no challenge in the GOP primary. For a while it seemed that former Lt. Gov. Mike Stack might run for the democratic nomination for that seat to give O'Neill a challenge in November, but Stack filed for an at-large slot.

Thirteen Democrats filed to run for one of two City Commissioner slots, giving the current Commission chair Lisa Deeley a tough race, while the incumbent Republican, Al Schmidt, is unopposed.

Incumbents are also facing challenges for row offices. Four Democrats are running for sheriff and three for register of wills.

It was a busy day at the Board of elections, with extra tables set up so staff could count signatures as candidates brought in their petitions. They needed at least a thousand if they're running citywide; 750 if they're running for a district council seat. But most, like Carla Cain, city commissioner hopeful, filed at least three times what they needed.

"I wanted to circulate the whole City of Philadelphia, so you'll find my petition from the north, all the way down to the south of the city. I wanted to shake that amount of hands," Cain said.

It also helps withstand challenges to signatures, which can be filed for the next week.

Tracey Gordon came to file some supplemental signatures for the petition she filed Monday.

"This is like the gravy on top of the mashed potatoes," Gordon said.

She's running for register of wills, so she thinks her task was harder than most.

"The average person does not know that the register of wills is actually an office, so I had to educate them on that," Gordon said.

The at-large ballot is expected to be so long this year that ballot position will play an inordinate role in the election. But that didn't worry immigration activist and first time candidate Erika Almiron.

"If you run a good campaign and you have a base of people who trust you, that's a good place to start from. And also, my mom is Catholic and I have her praying the rosary from here till then, so we should be good," Almiron said.

Ballot position will be determined next Wednesday, the day after the challenge period ends. Candidates will pick ping pong balls out of a Horn & Hardart's coffee can that has served the purpose for decades.