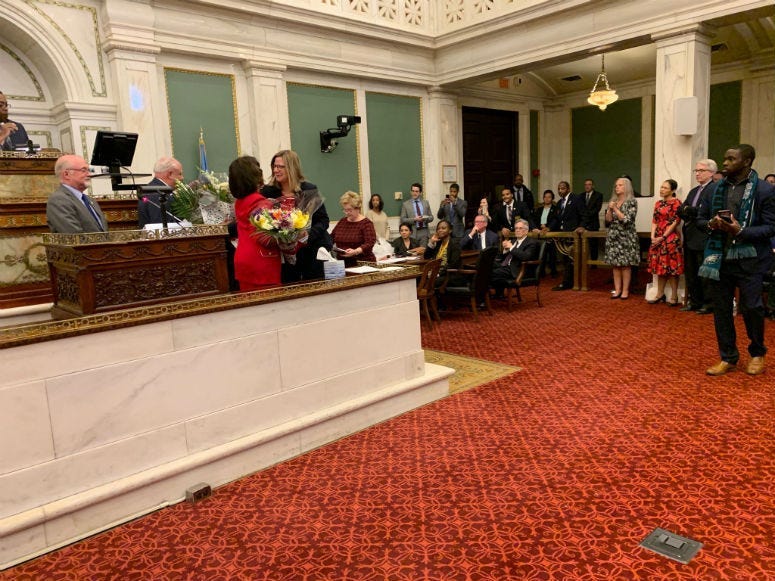 PHILADELPHIA (KYW Newsradio) — Philadelphia City Council wrapped up its four-year term Thursday, passing several hard-fought bills and honoring four members who will not be returning in the next term.

Among the 85 bills and resolutions Council passed was a ban on plastic bags, a bedbug reporting law, an expansion of the homestead exemption and a reduction of the 10-year real estate tax abatement.

Dozens of witnesses testified against the tax abatement bill, not because they don't want it cut, but because it doesn't go far enough.

"We want an end to the tax abatement and we will not accept this bill," said one witness.

Council President Darrell Clarke, though, is pleased the bill passed.

"We think we hit the sweet spot in terms of being fair and equitable. The conversation around that will probably continue," Clarke said.

Packed house for final @PHLCouncil meeting of this term. A billion (slight exaggeration) proclamations, including odes to the four members who won’t be returning pic.twitter.com/R0QYpcQJCv

It also included a rare visit from Mayor Jim Kenney.

"I just want to let you know you've all put your own imprint on this body over the years," Kenney said.

Taubenberger and Reynolds Brown are hoping to stay around City Hall.

Reynolds Brown is said to be up for a job in one of the city's row offices that would allow her to apply for the controversial pension payout known as DROP — something she vowed not to take as a Councilmember when she had to run for re-election.

She declined to disclose her plans.