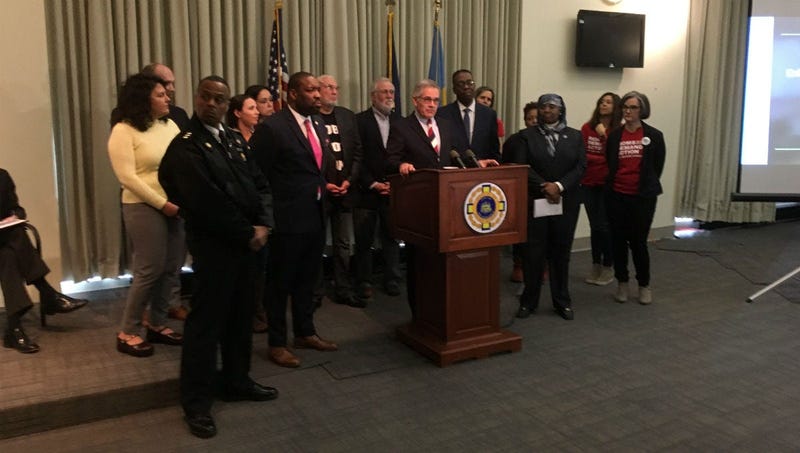 PHILADELPHIA (KYW Newsradio) — District Attorney Larry Krasner is likely to be challenged by the gun lobby, but he's going forward with a push to require Philadelphians to report to police within 24-hours of a firearm being lost or stolen. The ordinance was passed by City Council 10 years ago, but it has not been enforced since then.

Krasner says he's tired of hearing bogus stories about how people lose track of their guns.

"A lot of the guns that are claimed to be lost and stolen never were," he said. "They were sold illegally, and they end up in the hands of people who commit crimes."

Krasner says gun owners should report their weapons lost or stolen by dialing 911.

City Council President Darrell Clarke, who co-sponsored the legislation in 2009, said he is grateful that Krasner is pursuing the matter.

"Thank you for having the stones," he said. "That's not the word I really want to use. I'm just saying ..."

Clarke says all the gun owner has to do is report it, like any reasonable person would do if their credit card were swiped.

"First thing you do is get on the phone and call the bank to say stop the credit card, because I don't want anybody to use it," he said.

"Straw purchasing, people losing their guns, ... people selling guns. There's no tractor trailer pulling up at Broad and such and such, unloading guns," he said.

The legislation holds a possible $2,000 fine and, for repeat offenders, up to 90 days in jail.

Krasner claims former DA Seth Williams did not enforce the measure for "political reasons," but the ordinance was challenged by the National Rifle Association up through Commonwealth Court.

"When you strip all the rhetoric away, it's a minority with a very loud voice that dominates this conversation," Commissioner Ross said, alluding to the friction with the gun lobby.

At the time, Williams said it was pre-empted by state law.