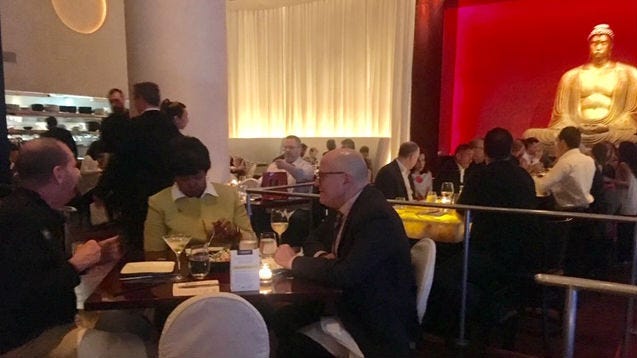 PHILADELPHIA (KYW Newsradio) — It was a night of dining and donating in Philadelphia and the suburbs Thursday night.

Hundreds of diners brought their cravings for dumplings and dim sum doughnuts — and their hunger to help — to Buddakan, in Philadelphia's historic district.

It was one of about 150 restaurants participating in Thursday's Dining Out For Life fund raiser by contributing 33 percent of their proceeds for the night to support Action Wellness, an HIV nonprofit.

"Enjoying a great meal with friends and family and making a difference in the fight against HIV," said Robb Reichard, executive director AIDS Fund Philly.

Reichard said he was thrilled to support his friends at Action Wellness for Dining Out For Life — the key words being "wellness" and "life."

DeLaurentis takes personal pride in the organization, where about 400 volunteers help about 4,000 people living with HIV and other life-threatening conditions in Philadelphia.

She says they hope to make $200,000 from the foody fundraiser, which was created in Philadelphia in 1991 and has exploded in popularity.

DeLaurentis said similar efforts take place in more than 60 cities in the United States and Canada.