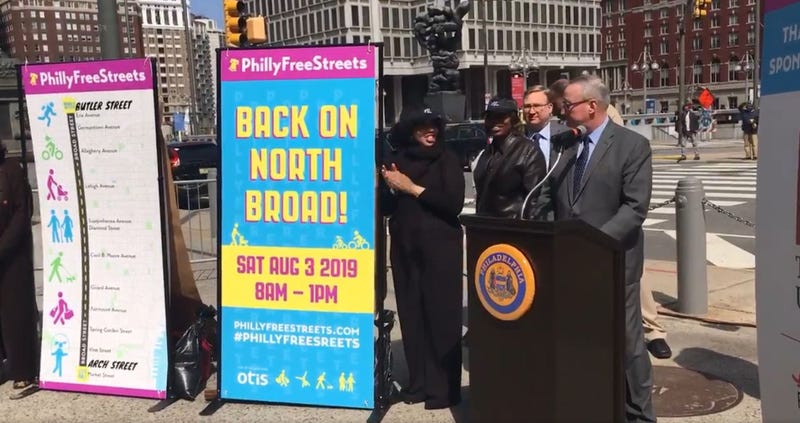 PHILADELPHIA (KYW Newsradio) — If you're the kind of person who likes to amble around on major streets usually clogged with cars, Philly Free Streets is returning Aug. 3.
This will be the fourth annual celebration of pedestrian power, inspired by the almost magical feeling of car-free streets when Center City shut down for the pope's visit in 2015.

So far, the city has shut down South Street, a three-mile route from Old City to Kensington and, last year, a long stretch of North Broad Street. Mayor Jim Kenney says last year's event attracted 50,000 people from all over the city.

"I saw people of all ages, all backgrounds and all physical abilities enjoying the open street," Kenney said. "I saw a father on roller blades pulling his young son on a tricycle, and an elderly gentleman who moved his chair from his porch to the middle of Broad Street to be immersed in the positive energy created by people, not cars."

So it's back to North Broad in August. Four miles of it will be closed to cars, from City Hall to Butler Street, from 8 a.m. to 1 p.m.

"The Broad Street that we once knew is not what it is now, and this is a chance to see everything new that's going on on Broad Street," Bergman said.