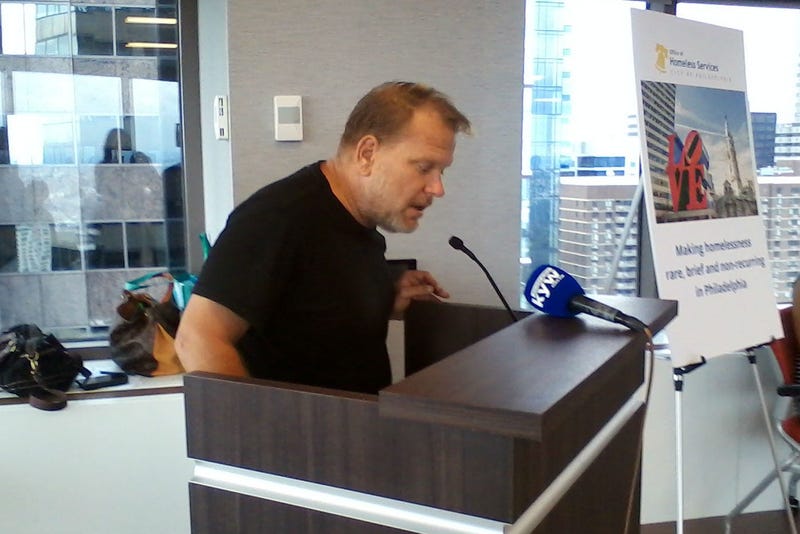 PHILADELPHIA (KYW Newsradio) — With tourist and convention season about to kick into high gear, Philadelphia officials are re-starting the effort to reduce street homelessness and panhandling in public places. That includes expanding a new program that provides same-day work and pay.

Norman Boch has struggled since an illness left him unable to work, but he recently got hired for the day by the Mural Arts same-day work program, which it calls Color Me Back.

He was so overwhelmed by the opportunity of a barrier-free job that he wrote this poem, which he shared at a news conference on the city's plans for Shared Public Spaces over the summer:

Color me back. From where? From you can't, you won't, you didn't, you don'tback from I don't care,from no clothes to work in, from doors closed by past mistakes, blemishes that won't go away in people's eyesfrom foul smells to redolent cries. They called my number and said, "come fly"A simple lottery a chance at last to win somethingPersistence pays and paved the way.I tried every dayColored into a world where I suddenly matterwhere I have a voice and a chance.Colors and lines and what's inside invited out.I earn something, I learn something, I'm part of something, againA raindrop that grows into a floodKindness and an actual chance — tough love debunked.I know I've had enough.Love made it rain and I rejoice in thanks for this. Color me back to life again

The city's plan features extra outreach, daytime respite, nighttime beds and, new this year, an expansion of the two-month-old same-day work program and the creation of a private-sector effort called Philly Cares.

McNichol says Wawa and Preit have already signed on.