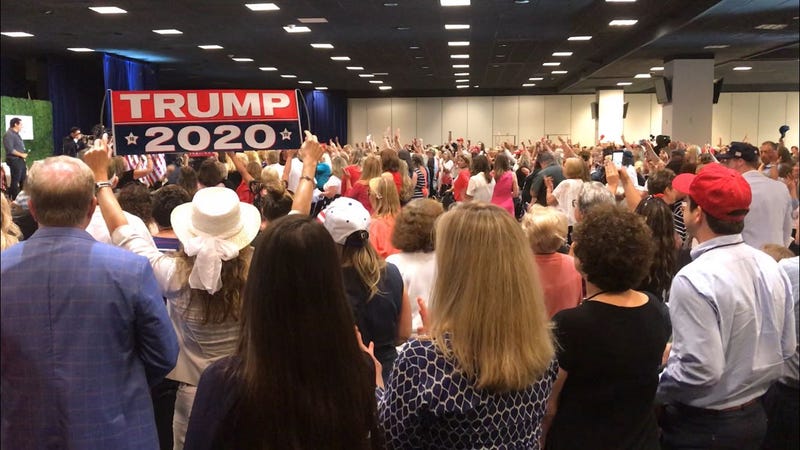 KING OF PRUSSIA, Pa. (KYW Newsradio) — When Donald Trump won the White House in 2016, he lost women’s votes by a double-digit margin. Heading into 2020, his campaign is hoping to flip the narrative as they hosted the first Women for Trump rally in King of Prussia today.

“This is a group of patriotic women, we love our country and we love our president,” said Republican National Committee Chairwoman Ronna McDaniel, who opened the rally.

She brought the crowd of hundreds, mostly women, to their feet, many wearing "Make America Great Again" hats and waving flags, many feeling they’ve been criticized and even bullied for their political beliefs.

"The difference between our party and Democrats is we treat women as the whole voter," she said. "Women care about health care. We care about education. We care about our military. And yes, we do care about the unborn."

Women for Trump coalition kicks off with a rally at Valley Forge Casino in King of Prussia. Gets underway at 10:30. @KYWNewsradio pic.twitter.com/uD8dCUBFAJ

Among the hundreds in the crowd was Tina Byrd from Kennett Square. She says she's there to push back against the narrative that women in the suburbs don't like Trump.

"I've already talked to so many women, and they are college educated and they are for Trump, so it’s just kind of dispelling the rumors," she said.

Some more of Monday’s attendees had this to say about President Trump:

“There is an attempt by certain segments of the media to make us feel in the minority.”

“See how many women come out for Trump? They will realize that he is not disliked by many, many women.”

“I think it shows people that you don’t have to be afraid if you do support Trump to come out and say that.”

Trump campaign manager Brad Parscale says they picked King of Prussia for the Women for Trump kickoff for a reason.

"Even today, why we're in this building, the decision was made from multiple data sets to come together and say this is the right city and these are the right women to help us win Pennsylvania," he added. “If we win Pennsylvania by 5,000 votes it might be because every woman in this room walks out and gets four people to vote for us. That could be the difference.”