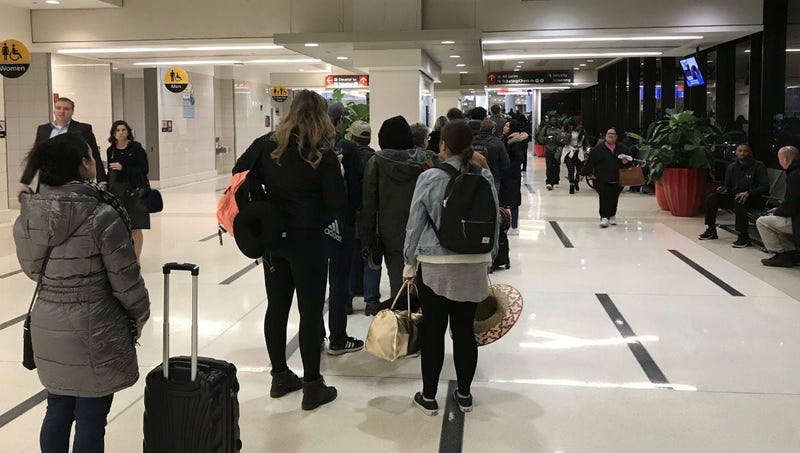 PHILADELPHIA (KYW Newsradio) —  With no end in sight for the partial federal government shut down, TSA employees missed their first paycheck on Friday.

There are reports of a good number of TSA employees calling out sick around the country, leading to long lines at security checkpoints at some airports.

Passengers at Philadelphia International Airport waited no more than 17 minutes at last check on Wednesday. There were some slow points on Friday morning. At some points, the line at Terminal D/E was similar to the one the day before Thanksgiving.

At some points this morning, the TSA checkpoint line at Terminal D/E at Philly International was similar to the one the day before Thanksgiving. @KYWNewsradio #governmentshutdown pic.twitter.com/k97hk3hZ6P

They are among the "essential federal employees" called in to work with no pay, as well as air traffic controllers.

“You’re already in a ... very stressful job," said Dan McCabe of the National Air Traffic Controllers Association. "And now when you go home, you're thinking about 'How am I going to pay my mortgage? How am I gonna pay for childcare?’ It changes the dynamic at the dinner table for the families of the controllers."

McCabe says they don't know when they're going to get paid next.

“We were last paid Dec. 31. The next scheduled paycheck would be Jan. 15. We’ve been told that if there’s no resolution by Jan. 11, that paycheck will not come,” he said.

TSA says the sickouts are not disrupting air travel. An official tweeted recently that there is only a 1 percent increase in call outs compared to this time last year.

TSA data shows approximately a 1 percentage point uptick in call-out rates compared to this time last year. This statistic does not comport with the unofficial and anecdotal narrative others have been providing to media outlets.

Local call-out numbers are not known at this time.

Airport officials say safety is still their top priorit and they will call in additional agents and inspectors as needed.