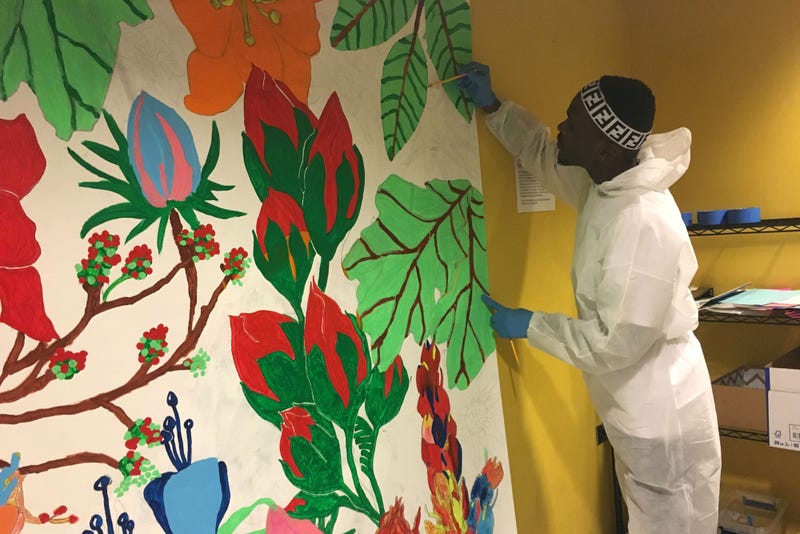 PHILADELPHIA (KYW Newsradio) — Cities around the country are experimenting with employing homeless people by offering jobs that provide a day's pay for a day's work. Philadelphia has developed its own version of the "same-day pay" model, with a pilot project run by the Mural Arts program.

Monday through Thursday, at 8:30 a.m., homeless or financially struggling people gather at the LOVE statue, in hopes of being one of 10 people who'll be hired for the morning to work on a mural in Suburban Station. At noon, they get paid: $50. Cash.

Since the program started in late April, the crowd of hopeful workers has grown to about 40, and the program staff have instituted a lottery to fill the slots.

"It's a start, you know. It gets me from point A to point B," says Belo, 25, who's been hired five times. "It may not be much to a lot of people, but it's something to me. It's something you didn't have before you came here."

The appeal of same-day work is that there are no applications, tests, interviews or credentials. Most cities use it to discourage pan-handling. They frequently put the hirees to work cleaning up litter.

Philadelphia's model — led by Mural Arts and Mental Health Partnerships, with support from SEPTA and the Office of Homeless Services and funding from the Barra, Sheller and Scattergood Foundations — has a different focus.

"The big idea behind the program is that people who are grappling with housing insecurity should have the same opportunities that people do who love art, who graduate from art school, who had many opportunities and options," says Mural Arts Executive Director Jane Golden. "Part of what Mural Arts is driven by are issues related to equity and access and opportunity."

Golden was delighted to learn that Belo had worked on a mural in West Philadelphia, five years ago.

"Oh my gosh, that's great," she said, clapping her hands. "You worked at Mural Arts and you're back! You know what I hope? I am going to give you my card and then you should stay in touch with me, because we want this to lead to other things. So you could assist on other projects around the city and, who knows, maybe some day you'll be lead muralist."

'Some kind of opportunity'

The workday starts with program co-ordinator Emily Crane reading the rules: "Come ready to work for the entire three hours," she instructs. "In order to receive your payment, you must contribute to the full three hours of work."

Lead artist Al Tull follows up with a pep talk.

"This is where you get an opportunity to express yourself through art," he says. "This is an opportunity for those society calls 'economically insecure.' That's just a fancy name to say homeless and panhandling.

Kevin Davis says he comes to try to get hired any time he's not at his regular part-time job.

"Lo and behold, Kevin Davis's number was called for the second time, today," he said. "Thank God for that."

Davis likes to write, but he is growing fond of the visual arts.

"It's a form of expression and emotion without you even saying something," Davis said.

For Ella Tucker, it was her first time getting hired. Her roommate in the shelter where she stays told her about the program.

"I love painting and art," Tucker said, but she admitted she was intimidated by the large, colorful flowers decorating two walls. "I'm going to see how they do it before I make a mistake."

Milton "PD" Brown lucked out. One of the lottery winners wandered away before reporting so he got plucked up as a replacement.

"I was just walking down the street and they asked me if I wanted to participate," he said. "I didn't know what it was, but I'm glad I volunteered, because it helped me open up and feel better, even about myself, just doing this today. I'm happy."

Reminded that he was not a volunteer, because he'd be paid, Brown said, "If it was a voluntary thing, I would still be as rewarded as getting money."

By the end of the day, more bright flowers had sprouted on the walls. The workers had cleaned up their supplies and waited patiently to receive an envelope with their day's pay.

This pilot project is expected to last into the fall, but Golden thinks it could become permanent.

"We hope this becomes part of how we do business moving forward."