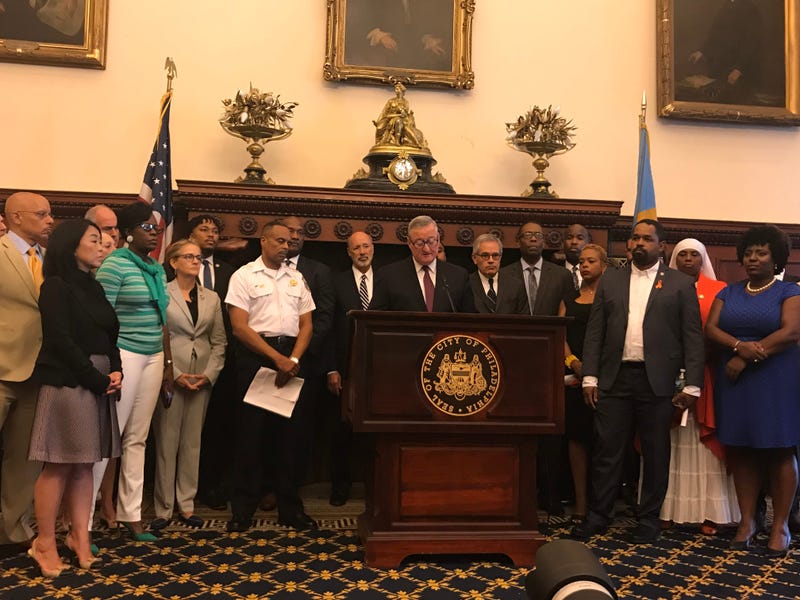 Each focused their attention on gun violence, the need for background checks and a ban on assault weapons, while also praising the police department's handling of the shooting.

Kenney spoke emotionally about seeing police officers escorting kids out of daycare centers near the scene of the shooting. He praised the police, saying Wednesday night marked one of the finest moments in the department's history. "Bravery is the No. 1 emotion," he said. "Their training and responsibility was unmatched. They were keepig each other safe, while being barraged by rounds from a high-powerd firearm."

"Police need help to keep guns from the hands of bad guys," he said. He called for strong gun control measures from Harrisburg. "Step up or step aside," he said.

Gov. Tom Wolf said he will push the state will do all it can to make sure incidents like this do not happen again and plans an executive order.

"I will do everything I can as governor to get the General Assembly to step up and pass legislation that will start getting guns out of the hands of criminals like this," the governor said.

And Casey said it's time for the U.S. Senate to vote on a background check bill that came their way over 100 days ago. He also called for a ban to keep military assault weapons off the streets.

All six police officers who here shot in a standoff with a gunman in North Philadelphia on Wednesday are out of the hospital and recovering at home.

One officer, who was hurt in a car accident on the way to the scene, is still in the hospital.

Police have released the names of the six officers:

Officer Joshua Burkitt, 26, a two-year veteran assigned to the 24th District, sustained a gunshot wound to the left hand

Officer Shaun Parker, 32, an 11-year veteran assigned to the Narcotics Strike Force, sustained a graze wound to the head.

Officer Nathaniel Harper, 43, a 19-year veteran assigned to the Narcotics Strike Force, sustained a gunshot wound to the left leg.

Officer Ryan Waltman, 42, a 12-year veteran assigned to the 39th District sustained a gunshot wound to the right hand.

Officer Justin Matthews, 31, a three-year veteran assigned to the 16th District, sustained a graze wound to the left leg.

In a briefing at police headquarters Thursday morning, Ross said he is surprised the suspected shooter, 36-year-old Maurice Hill, is still alive.

"We're very fortunate that no one was killed in this incident," he said.

The standoff started around 4:30 p.m. as officers went to a home in the city's Tioga-Nicetown neighborhood to serve a narcotics warrant in an operation that Ross says "went awry almost immediately."

He was on the scene at 15th Street and Erie Avenue, personally negotiating with the shooter, 36-year-old Maurice Hill, who told Ross he had an extensive criminal record.

"It was an unusual circumstance, so we took unusual steps, because we're about the preservation of life — in this case, even his," Ross said. "This is something we were trying to convey to him all night long."

Ross said police have not been able to go through the house where the shooter was holed up Wednesday because the tear gas used to flush the suspected gunman out is still in the air.

"There are a lot of questions because that crime scene is still fluid, and just prior to me getting here, we still weren't able to gain access because when you use taer gas, it still remains inside for a long time and you have to take the necessary precautions," Ross said at the City Hall press conference.

"We know that he had one hand gun that, believe it or not, he had in his pocket when he came outside and surrendered. We know that he had an AR-15 which was likely that he was firing at police repeatedly. I cannot tell you how many times he reloaded, that is a question we will try to figure out from ballistic evidence," Ross added.

"There are still several things about this investigation that we have to pin down, that we will be getting in short order, because when you haven't finished a crime scene, you know, you have so many missing elements."

Two police officers and three civilians were trapped in the house for hours during the standoff. Ross said that, in his press briefings on Wednesday, he didn't want to give away that there were police officers in the house, because he wasn't sure if the gunman knew about it.

Their safety in that moment was Ross' first concern. Ross says that's why he was so close to the scene. Police were afraid the shooter might hunt them down.

The officers and civilians were all released at the same time, transforming the hostage situation into a barricade situation, requiring different tactics. That's when police were able to use tear gas.

It's not normal for a commissioner to be so close to a barricade situation, but Ross said he wanted to make sure the situation came to a peaceful conclusion. He took direction from detectives who were experienced negotiators, and he thanked all the officers who helped make it happen.

"All those folks who were inside trapped, not one of them was injured. Nobody died, including the suspect. That in and of itself speaks volumes to their dedication, their patience, their tenacity and everything else. I say that I am thankful to them. I thank each and every one of them," he said.

Police are still waiting to search the house to find how many weapons and how much ammunition the gunman had. Ross said he believes a long rifle was used to shoot at police from a lower level of the house.

Hill's lawyer, Shaka Johnson, helped police get him out. Ross said it was an unconventional move to bring someone into a situation like this.

Johnson says initially he was at home watching the situation unfold on television like everyone else, but when negotiations between Hill and the police weren't getting anywhere, he got involved.

"He was obviously very anxious and concerned, and let me know that he was the person inside the house who needed to be brought out and wanted to come out safely," Johnson said. "He asked me to specifically be here on scene when he came out, because he was certain that my presence would mean that nothing would happen to him."

Philadelphia District Attorney Larry Krasner confirmed on Thursday that he was on the phone with Maurice Hill Wednesday night. He says Johnson called his cell phone directly, and within seconds the D.A. was on three-way phone call with the shooter and his attorney, in the middle of trying to negotiate with Hill to come out of house.

Krasner said he never spoke to police commanders on the scene before speaking to Hill; he just picked up, and then Hill was on the line.

"I went there. Mr. Johnson went there. That was done with the understanding from the police commissioner — who I think did a tremendous job, and I think the police department did an amazing job with the entire incident. The police commissioner once again kept us off the block, but we were nearby, and Mr. Johnson was on the phone on speaker with Maurice Hill, as he exited that property," Krasner said.

There are questions about the legality of that phone call and whether or how he could prosecute the case, as his involvement might now present a conflict of interest.

"We certainly are going to examine that seriously and carefully," Krasner said, "and see if it raises any issue, and see what the law requires."

Krasner fully credited the the work of the police department and Commissioner Ross for leading Hill out of house.

Johnson said he was also on a three-way call with Ross and Hill.

He described a tense scene. When Johnson got there, wearing a bulletproof vest, he got on a bullhorn.

Ross says Hill came out of the house with gun in his waistband. Officers approached Hill and took him down. Then Hill got treatment at Temple University Hospital.

Krasner said Thursday that Hill was a tremendous danger to the community, and said he had not had any charges against him since 2016. Hill will now face attempted murder, aggravated assault and a slew of other charges, says Krasner.

"These are more than enough charges so that Maurice Hill will never exit jail," said Krasner.

Fraternal Order of Police president John McNesby is calling on the D.A. to enforce the gun laws that already exist.

He said he hasn't seen a siege like this in decades. McNesby says with the first report of an officer shot, the enormity of the situation grew.

He also criticized Krasner for not being tougher in prosecuting gun crimes.

"Everybody calls for stronger gun laws. We have a district attorney that doesn't enforce the ones that we have on the books. And that's the problem, folks."

U.S. Attorney Bill McSwain agreed about enforcement of gun laws and took some swings at the D.A., himself.

He said in a statement released Thursday that the disrespect for law enforcement that led to this incident is "promoted and championed" by Krasner.

"It started with chants at the D.A.'s victory party — chants of 'F--- the police' and 'No good cops in a racist system,'" he said. "We've now endured over a year and a half of the worst kinds of slander against law enforcement — the D.A. routinely calls police and prosecutors corrupt and racist, even 'war criminals' that he compares to Nazis."

He said the rhetoric puts police in danger and leaves Philadelphians open to harm.

McSwain said there are plenty of criminal laws in the city, but what's lacking is enforcement by the district attorney. He said he wants Krasner to "stop making excuses for criminals."

He announced that the U.S. Attorney's Office will work with the Philadelphia Police Department and federal agencies to investigate the shooting.

On Thursday morning, President Donald Trump tweeted about the incident, saying Hill should never have been allowed on the streets and that law enforcement must get tougher on street crime.

The Philadelphia shooter should never have been allowed to be on the streets. He had a long and very dangerous criminal record. Looked like he was having a good time after his capture, and after wounding so many police. Long sentence - must get much tougher on street crime!