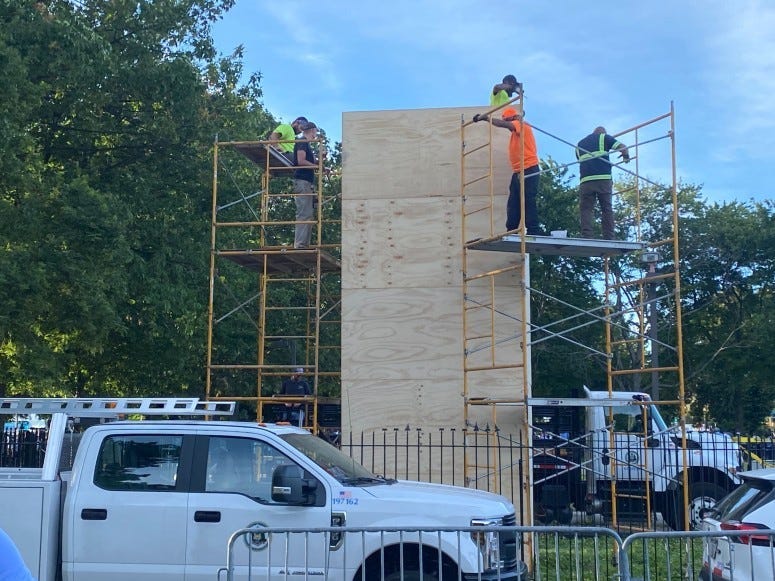 And during weekend standoffs at the statue, Campione, a 43-year veteran of the force, was captured on video warning a would-be journalist to leave, as he was “inciting a riot,” the captain said.

On Monday, Campione was reassigned from commander of the 1st District in South Philadelphia to the Standards and Accountability Division.

The Fraternal Order of Police Lodge 5 said the shift was due to the “volatile and chaotic situation,” though a spokesperson for the police department said the reassignment is not related to any specific event.

City crews have covered the Columbus statue with a wooden box, and only some parts of the statue's head is visible now. According to the city, workers boxed it up “in order to preserve it.”

Crews are currently building a box around the Columbus statue in South Philly “in order to preserve it,” according to the city @KYWNewsradio pic.twitter.com/n0tvJtYUW7

Depending on where you stand you can still see part of the head but most of the Columbus statue is no longer visible @KYWNewsradio pic.twitter.com/zc3Yi0Qp54

The “blue” supporters were met with some counterprotesters, though they mainly stayed across the street. Some crossed toward the statue to exchange shouts with the crowd.

"He’s done more for this area than anyone we know. Lou’s definitely one of the best captains in the Philadelphia Police Department right now, so we’re really upset about the way things went down,” said Charles, who came to show support for Campion.

Promotional material for Tuesday’s rally said demonstrators “are not in favor of ‘defunding’ the police. We want to defend the good police! Rain or shine.” They say Campione is the epitome of “community policing.”

FOP President John McNesby issued a statement on Campione’s reassignment: “The Mayor and Police leadership are more concerned with appeasing the anarchist mobs descending upon our city and are less concerned about our citizens, our neighborhoods and the overall public safety of our great city.”