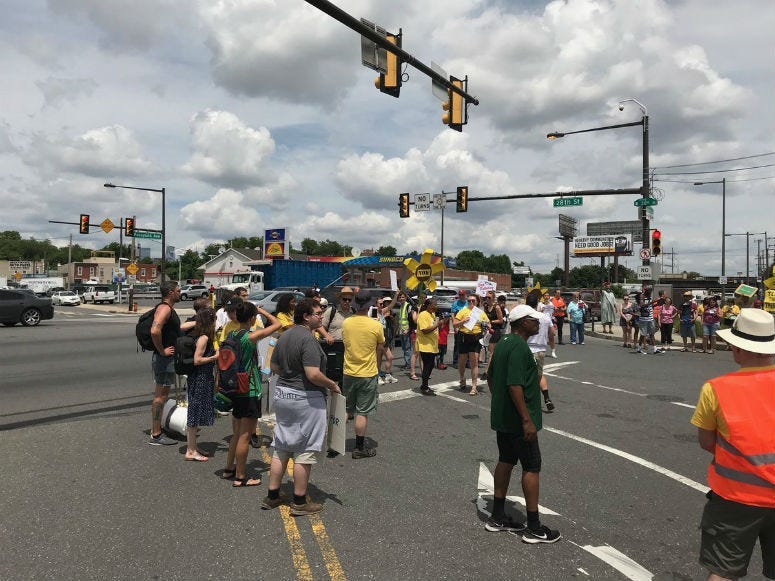 PHILADELPHIA (KYW Newsradio) — Sixteen police cars lined the street near 28th Street and Passyunk Avenue in South Philadelphia Tuesday afternoon as protesters, who say they want the Philadelphia Energy Solutions refinery shut down, blocked the intersection into the plant.

Dozens of protesters blocked the street for about five minutes before they moved into a nearby park.

Activists carrying signs reading "Stop Polluting the Poor" and "We have a right to breathe without disease" are angry because they claim PES has been polluting these neighborhoods for a long time, and people are dying.

Avery Broughton is a high school senior who joined the action.

"Everybody that lives in Philly is directly affected. But they have family members who have died of cancer, they're the ones with asthma and they don't even know about the refinery and the effects that it has. And so it's so important that we are out here doing this today," Broughton said.

Sylvia Bennett was rocked from her bed when the fire and explosions hit last Friday.

"I heard a boom, boom. When I woke up and watched the news, I seen what was going on, I said 'Thank you! Thank you! You sent a message to all the people,'" Bennett said.

Kilynn Johnson lives nearby and says she woke up last Friday with a headache, feeling nauseous, her asthma was acting up and she ended up in the hospital.

Philly Thrive, which organized the event, started protesting PES even before the two fires this month and plans to continue.