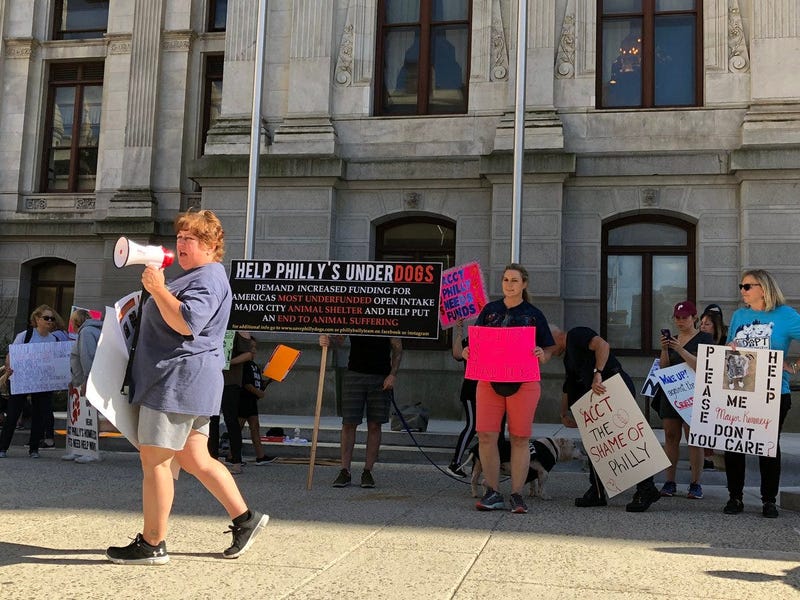 "Where's the money?" A woman on the megaphone shouted, "Save the shelter!"

At about $180 per pet, Animal Care and Control Team volunteers say the $4.3 million budget is well behind many other comparable cities.

"Baltimore, a city that has even greater poverty levels than Philadelphia, they have a budget of $4.6 million and their intake is about half of what Philly's is," said Ian Griffiths, who has been volunteering at ACCT for more than three years.

Griffiths says conditions in there are terrible.

"A lot of dogs, they're covered, their whole kennel is covered in poop," he said. "We have about one-third of the staff that comparable shelters with comparable intakes have. So the staff is really, really working hard."

Protesters gather at City Hall to demand more money for the city’s animal shelter @ACCTPhilly They say other cities are doing a much better job at providing resources for animal shelters pic.twitter.com/pCqZtumsB9

"Philly is a dog city, dog lovers all over the place, and we feel that if people are aware, maybe they'll put some pressure on the board and on the city to raise more funding for the shelter," Graaf said.

She says some board members have shelters of their own, so they don't raise much money for ACCT.

In a statement, the city says "while we have many pressing needs that need to be addressed in the upcoming year, we have made significant commitments to increasing funding for ACCT." The city also says it will continue to support the animals and staff, adding "we will continue to support ACCT Philly to the best of our abilities, prioritizing the health and safety of the animals in ACCT’s care, as well as the staff and volunteers who help care for them."