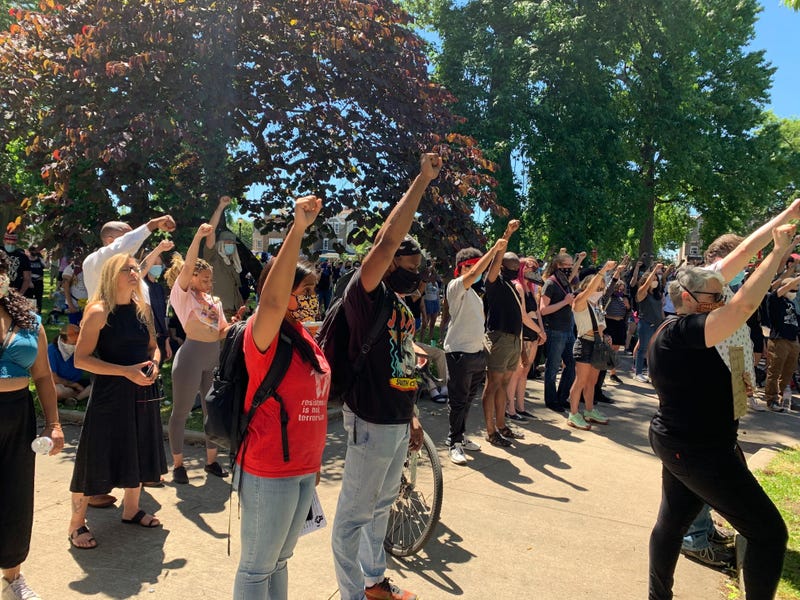 PHILADELPHIA (KYW Newsradio) — Protesters gathered in Philadelphia Saturday to rally against police funding, which includes getting police out of Philadelphia schools.

At a rally in West Philaldelphia's Malcolm X Park that drew hundreds of people, Saudia Durrant, an organizer with the Philadelphia Student Union, said the movement to defund and abolish police is really about reallocating resources.

"Before the pandemic, our students were in schools where they could barely have soap every day, barely have toilet paper, barely have water fountains that work," she lamented.

Durrant gave examples of school police terrorizing students for minor infractions, including one at Ben Franklin High School in which she said students videotaped an officer assaulting a student allegedly because he didn't have a hall pass.

"Laporshia Massey died in 2014. She had a nurse that was only employed for two days out of the week," she recounted. "And that day she had an asthma attack, that nurse was not there. But a cop can be in there full-time."

Black Lives Matter Philadelphia member Krystal Strong said Philly is one of the most heavily policed cities in the country.

Strong added much of that force is used disproportionately against Black and brown people who would be better served through social services rather than police.

"The fact that police could monopolize so much of our public resources speaks to the lack of control we have over the resources that our ours."

Durrant said retraining police is not the answer, as they've tried that in schools. And she vowed that protesters will continue to put pressure on School District Superintendent Dr. William Hite throughout the summer.

"We want every single cop that is in these schools out by the time schools reopen," she declared.

Hundreds gathered at Broad and Callowhill for a #DefundThePolice rally. ⁦@KYWNewsradio⁩ pic.twitter.com/HUTCqnw5Oi

Demonstrators also gathered at Broad and Callowhill, in front of the School District headquarters and the former Inquirer building, currently being converted into the new Philadelphia Public Safety Building, which will house the Philadelphia Police Department.

Jed, one of the organizers with Philadelphia Socialist Alternative, talked about their calls to defund the police.

"We're calling to slash the police budget by 50% immediately, and to take that money and put it into social serrvices, counseling, restoratice justice, things like that, which is going to much better effect," he said.

Brett Milbourn Sr. says he experienced police brutality as a child and came from Chester County to show support and solidarity.

"It was a bank robbery and just because of the color of my skin, I got beat down, so I'm out here fighting for that," he shared. "My mom's also a schoolteacher in my community, and they took away a lot of funding, and they built a couple new police stations and township housing too. It's not just affecting the Philly community. It'a affecting the smaller communities around it too."

Protesters marched through Center City to converge upon the site. The Pennsylvania State Police were called to control and divert traffic through the area, including shutting down the Vine Street Expressway in both directions.

A growing crowd then marched down North Broad Street to City Hall, where they encircled the building. The march finally came to a halt at 3rd and Race Streets, before dispersing.

CORRECTION: In an earlier version of this report, Saudia Durrant's name was mispelled. We apologize for the error.