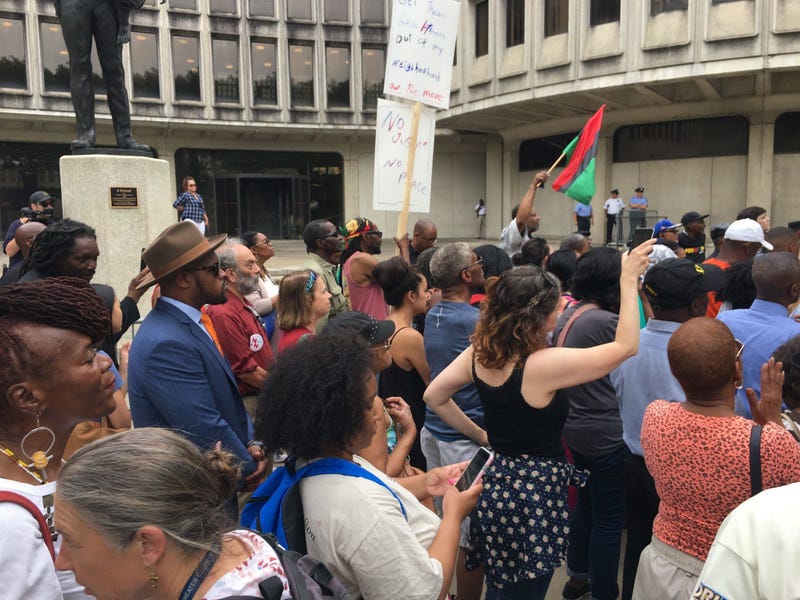 PHILADELPHIA (KYW Newsradio) — Under the watchful eyes of police officers and commanders — and that famous statue of a caring officer holding a child — about 100 people formed a circle around the marker, demanding justice.
In the wake of an investigation that revealed past and present Philly officers made controversial and racist social media posts, demonstrators gathered outside the Philadelphia Police Department's headquarters Friday to protest.

"It's time to choose sides," shouted one protester through a megaphone. "Time to take them off the streets."

Police Commissioner Richard Ross has assigned 10 cops in question to desk duty while an independent law firm pours through their Facebook posts, which were compiled by watchdog group The Plain View Project.

But protesters say that's not enough.

"I'm looking for there to be new implemented systems and education and training for the police officers," said Rev. Jeanette Davies.

"A consequence has to be made," said protester Hassan Bennett. "When they think of a sentence, public interest goes into the sentencing process. Same thing when you punish a police officer for misconduct."

"None of the police live in our communities," added Nana Yaw Grant. "They don't have any relationship with the people there. When they come to our neighborhood, it's like we are the enemy. ... I would like to talk to some officers of color that work with these officers that made these posts. I think those officers should man up and come out here and talk to us. Those that work with those officers and let us know about it."

The social justice organization POWER also participated in the rally, while a long line of police officials watched.