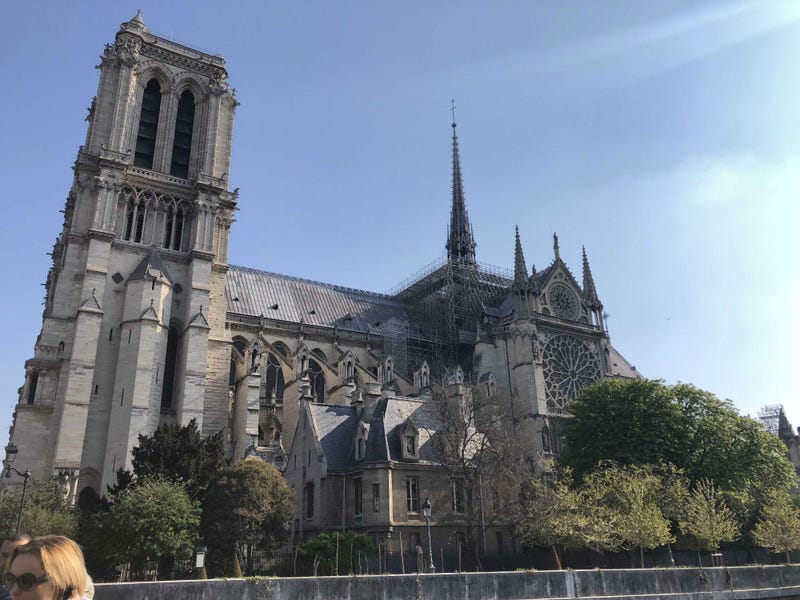 PHILADELPHIA (KYW Newsradio) — As the iconic landmark burned on Monday, many people shared their memories of visiting the Notre Dame cathedral. Among them was a KYW Newsradio colleague, who was just there the day before the French gothic cathedral caught fire.

Charlotte Reese, a writer at KYW, just got back to Philadelphia on Monday from a trip to Europe. When she landed, she saw what had happened.

"My phone just got back on. My service was on. My first news notification was that Notre Dame was on fire," she said.

Less than 24 hours prior, she says, she was walking toward the historic building.

"The atmosphere was amazing. Considering that it was Palm Sunday, ... security was all over the place. The line just going into the building was maybe a mile long. It was massive," she said.

"It may be the last Palm Sunday service in that exact building. So, amazing to be able to see that. Got a little video of it, and I feel very blessed but very sad."

Reese says after she left, some friends were still in France. To see their pictures, their video of Notre Dame up in flames, was stunning.

Kristin Putthoff, a friend of hers from Kansas City, was there to see the smoke rising from a distance.

"We saw that it was Notre Dame on fire," she said.

She crossed a bridge over the Seine River, where she watched with so many others as the historic cathedral burned.

"There was huge flames coming right through the two iconic towers, and I could not believe my eyes — what we were seeing," she said.

"And then we saw the roof had caved in. The spire had caved in. It was just very, very hard to see," Putthoff said. "And I saw all the French people. People were crying, people were singing."

Putthoff says it's remarkable what the cathedral has survived in the past.

"It's just a hard thing to see, because it's such an iconic building. I mean, it stood for over 800 years," she said. "It survived wars, revolutions."

She says she feels for the French people, and she was moved to see their reaction on the streets of Paris as a part of their history burned before their eyes.