PHILADELPHIA (KYW Newsradio) — The city removed the statue of former Mayor Frank Rizzo from the front steps of the Municipal Services Building in the middle of the night. By Wednesday morning, all that remained of the larger-than-life figure was an empty space.

The bronze statue, standing 9 feet tall and weighing about 2,000 pounds, had stood at the site for 21 years.

Some think back fondly to Rizzo’s era as one of law and order. However, on Tuesday, Mayor Jim Kenney ordered the statue's immediate removal, calling it "a deplorable monument to racism, bigotry, and police brutality for members of the black community, the LGBTQ community, and many others," according to a statement from the city.

After midnight, with no notice to the public, crews got to work and, with the help of a crane, plucked the statue out of the ground, placed it on a flatbed truck, and drove it away. That work concluded Wednesday morning.

City crews, in the middle of the night, removed the Frank Rizzo statue from the front of the Municpal Services Building. @KYWNewsradio pic.twitter.com/re0W5tG5G0

Kenney had promised last summer that the statue would be removed next year, rolling the move into a planned renovation of Thomas Paine Plaza to save the city some money. According to the statement, he regrets that decision. 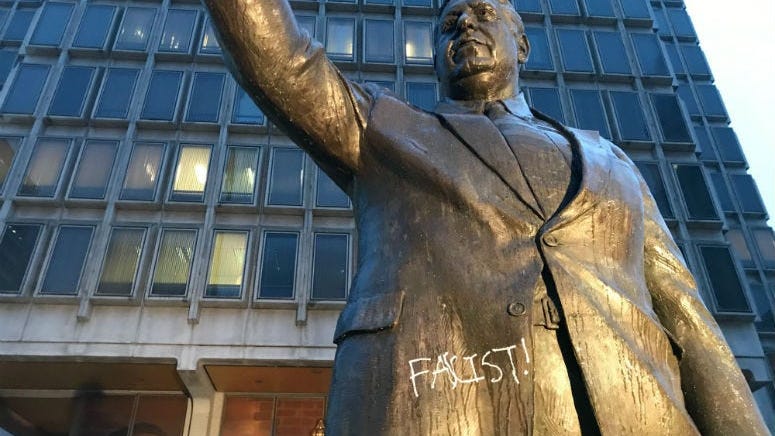 "That choice was a mistake," the mayor said. "We prioritized efficiency over full recognition of what this statue represented to black Philadelphians and members of other marginalized communities. The continued display of the statue has understandably enraged and hurt many Philadelphians, including those protesting the heinous murders of George Floyd and too many others. I have seen and heard their anguish. This statue now no longer stands in front of a building that serves all Philadelphians."

The statue represented bigotry, hatred, and oppression for too many people, for too long. It is finally gone. pic.twitter.com/30f2Skpqog

Explaining his decision, the mayor said Wednesday it is time to move forward and leave the Rizzo era in the past.

"In the course of the last week it was clear that we needed to show a symbolic effort to tell people we’re moving on and we’re gonna do better," he said.

Kenney said he hopes this is the beginning of a healing process for the city — and not just for those who have been protesting in recent days.

"I know some people think of him as a hero and the like, but there’s a large number of people in the city who lived in that time who go in (the Municipal Services Building) and pay their taxes and to get permits ...  and to go in there under his gaze was offensive to them."

The statue has been a lightning rod for anti-racism demonstrators in recent years and a frequent site of vandalism. Activists have spray-painted it, dressed it in a knitted pink bra and matching panties, and everything else in between.

On Saturday, the first day of protests in Philadelphia in response to the death of George Floyd, demonstrators set the base of the statue on fire and even tried to rip it out of the ground themselves. The next day, as protests and riots continued in the city, Kenney said he would expedite that process and move the statue in a month. Now the statue is gone.

Officials say the statue will be kept in secure storage until they have a plan to donate, relocate or dispose of it. There is no timeline for that process.

More from the Mayor. The city also says the statue is in secure storage. No timeline yet on its future. pic.twitter.com/HJYGtob6jb

There’s also a mural of Rizzo in the Italian Market, encompassing the entire side of one wall at Ninth and Montrose streets. The mural is often vandalized, and Mural Arts Philadelphia always cleans it up.

Mural Arts said it “decided to cease all involvement with the mural, effective immediately.”

"We do not believe the maintenance and repair of the Rizzo mural is consistent with our mission," it tweeted. "We think it is time for the mural to be decommissioned, and would support a unifying piece of public art in its place."

We do not believe the mural can play a role in healing and supporting dialogue, but rather it has become a painful reminder for many of the former Mayor's legacy, and only adds to the pain and anger.

The mural is painted on private property.