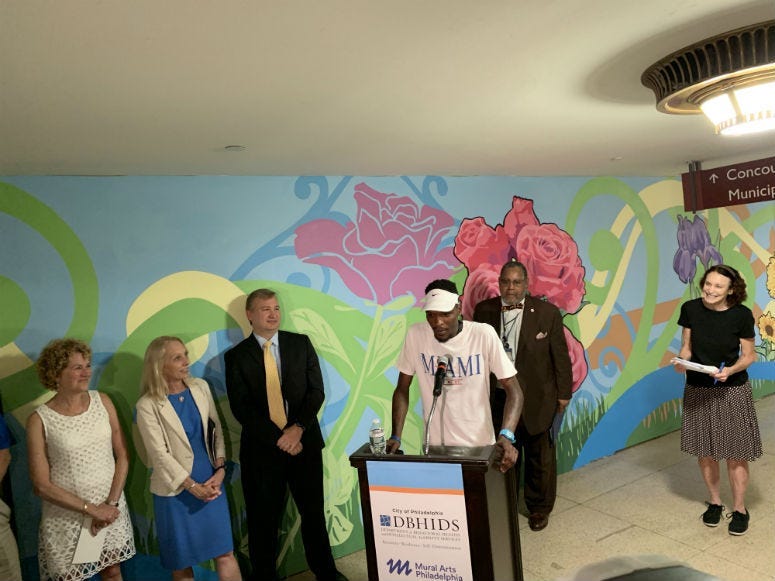 PHILADELPHIA (KYW Newsradio) — In April, Mural Arts Philadelphia began offering 10 jobs a day to any takers with payment made at the end of that day's shift. So many people lined up they had to use a lottery system to award the jobs.

On Tuesday, many of those employed by the program joined the city and SEPTA officials to cut the ribbon on the mural they made at Suburban Station.

The mural of colorful flowers on a pastel blue background brightens a formerly dank hallway, but what it's done for the artists who painted it is even more transformative.

"This program has really changed my life," said Michael Belo, who was unemployed when he started lining up in LOVE Park every morning for a shot at one of the ten jobs awarded by lottery.

The sixth time his number got picked, he happened to meet Mural Arts director Jane Golden and ended up getting hired.

"Now I'm able to work with the same people I was sleeping outside with and homeless with," he said.

"This program is unique in that we have modeled in on participatory public art-making," Golden said.

The program is based on models used in many cities to curtail panhandling, but Golden believes the artistic element of the program elevates Philadelphia's model and gives participants a sense of worth.

"It also shows us, without a doubt, the talent that resides in individuals throughout Philadelphia, the talent and the genius that has sadly gone unrecognized," she said.

Midway through the 28-week program, up to 70 people are vying for the jobs each day. That's prompted the city to add a new component with 10 more same-day pay jobs, working with CLIP, the city's beautification program.