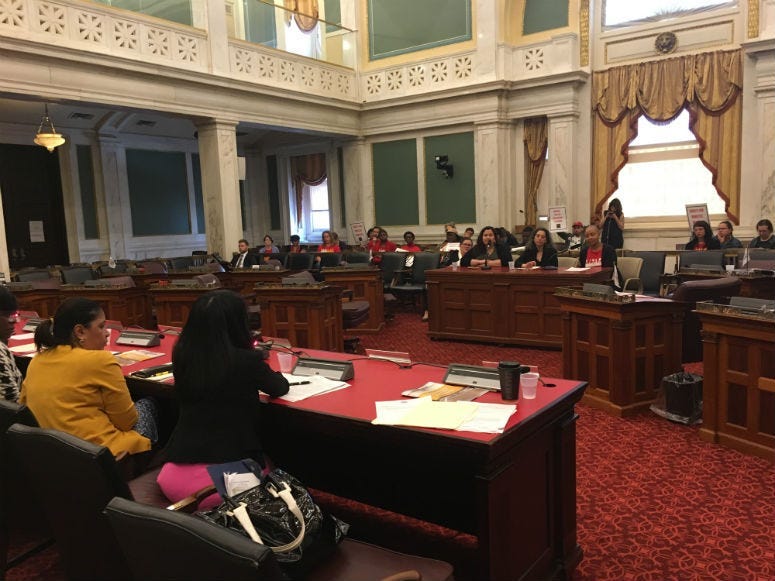 PHILADELPHIA (KYW Newsradio) — Some of Philadelphia's lowest paid and least protected workers got to air their grievances Monday as a City Council committee explored ways to help improve conditions for domestic workers and also sought to raise awareness about low wages in the parking industry.

Witnesses on a potential Bill of Rights for domestic workers included Maria del Carmen Diaz, who became emotional while testifying about being overworked, treated poorly and even stiffed by people for whom she worked.

"I'm sorry," she said through a translator, as she choked up, "but I've been through many things."

Advocates of the Bill of Rights, including deputy mayor for labor Rich Lazer, noted that domestic workers have been specifically excluded from federal and state employment laws.

"As a result," he said, "domestic workers have long faced job insecurity, wage theft, harassment, discrimination and other workplace abuses."

Even Philadelphia's own Fair Practices Ordinance exempted domestic workers for many years, according to Rue Landau, executive director of the city's Human Relations Commission, and still allows families to use a language or cultural preference when choosing someone for in-home child care.

Witnesses and council members suggested such exclusions could be the result of a bias against those who held the jobs, largely women and often women of color.

Allison Julien of the Domestic Workers Alliance says such biases continue to make it difficult for workers to demand better conditions.

"There are many immigrant women of color, many of whom are undocumented," she said, "and in this current political moment, it's extremely hard for workers to come forward."

Council members say they're already working on legislation to improve protections for the workers and expect it to have broad support. Even Councilman Al Taubenberger said the issue was close to his heart, as his own family had been domestic workers when they emigrated from Germany in the 1930s.

The committee also took testimony on pay in the parking industry, prompted by a recent study by Steve Herzenberg of the Keystone Research Center. The study found the average worker makes $9.50 an hour and has little or no benefits.

"Given limited opportunities for upward mobility within this industry, there is only one solution that can life these workers into the middle class," Herzenberg testified. "They need better pay and benefits."

Parking magnate Rob Zuritsky of Parkway Corporation says he was sorry he wasn't invited to testify because he disagrees with the report.

"The whole premise of the study, we think, is very misleading," he said.  He says he and other lot owners that he knows start their workers at $12 an hour and go up from there and also provide paid sick leave, health care, a retirement plan and other benefits. He believes the report surveyed mostly valet parkers, who Zuritsky says may be starting at a lower hourly rate because most of their pay comes from tips.

Council members say there is no legislation in the offing regarding parking attendant pay, the hearing was meant purely to raise awareness, but Councilwoman Helen Gym hinted Council could have its say.

She noted Parkway is developing a 29-story commercial building at 20th and Arch streets.

"I would encourage this Council to be paying close attention to make sure that those parking lot developments do not get approved if they plan to profit off of people making less than a living wage," she said to applause from the workers in attendance.

Zuritsky declined to respond to Gym's statement but warned that Council already makes parking concessions difficult with a tax that he said takes up to 50 percent of lot revenues.

"We're losing parking spaces to the tune of over 1,500 a year for Center City," he said. "At some point, we're going to get below critical mass to support Center City's economy. There's already parking shortages that are starting to occur and this is a very serious policy issue. So if the city really is interested in us continuing to pay fair wages and benefits, they should probably take some of the pressure off our industry."