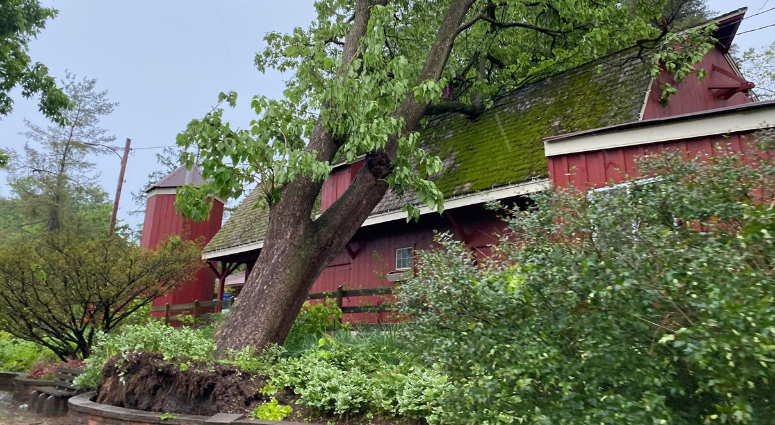 When the rapid-moving rain rolled in, elk, monkeys and other barnyard petting animals were outside in their enclosure. Meanwhile, a large tree uprooted and fell on the roof of the barn.

“We were lucky enough and we have such an amazing and skilled keeper team that we were able to shift all of the animals to the back of the house, or off-exhibit enclosure areas,” said Eric Donovan, zoo director of operations.

Fortunately, all of the animals are accounted for and safe. No staff members were injured.

However, the zoo is working to repair the damaged barn and zip line attraction, and it’s asking the public for help.

“We had an emergency fund campaign in place already as a result of the COVID closures,” said Donovan. “Every day that we’re closed is several thousands of dollars — roughly $20,000 in losses per day — that we need to recoup so that we can continue to put the money right back into our operation and our animal care.

“In conjugation with that, now that we have this additional storm damage and the additional expenses that are coming from that, we have ramped back up this emergency fund.”

The zoo estimates it will potentially lose $880,000 as a result of being closed during its peak season. Information on the emergency fund can be found here.

Wednesday’s string of fast-moving storms — called a derecho — saw winds in the range of 80 miles per hour, leaving a trail of wreckage and debris in its wake.

At least three people in Montgomery County died, and one in Delaware County. According to the National Weather Service, this is the highest number of fatalities from a derecho event in the area since 1950.