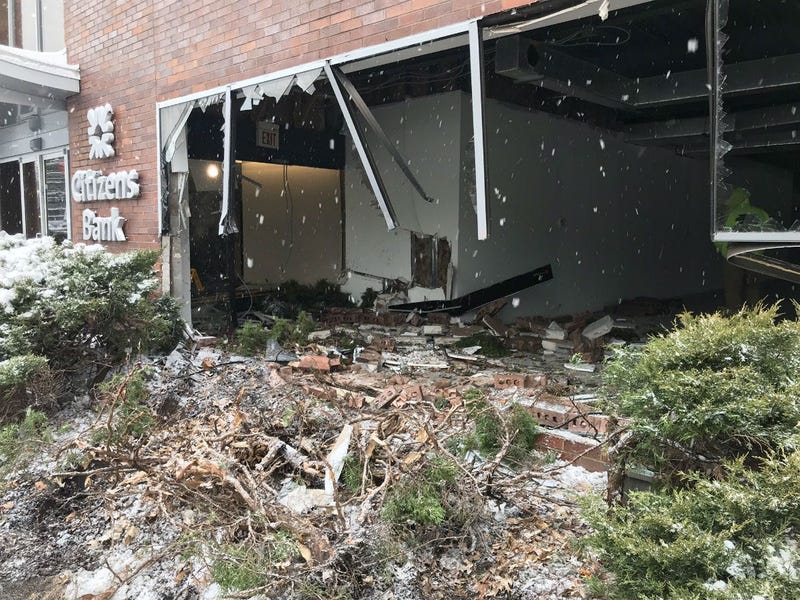 CHELTENHAM, Pa. (KYW Newsradio) — Friday had a snowy start in the Delaware Valley. Another blast of winter weather meant plow crews hit the roads and contractors cleaned up in parking lots. Spinouts on roads and highways snarled commuter traffic. And in one case, a plow truck slammed into a building.

The property manager at an office building at Old York and Meetinghouse roads in Cheltenham described the accident. He said a plow he hired may have clipped a car on Old York Road. The driver then panicked and hit the gas, went over a curb and kept going right into the building, smashing through a window.

The driver was okay and the office space he went into is vacant, so no one was hurt.

Plow crashes into a building at Old York Rd (611) and Meetinghouse Rd in Cheltenham this morning. All people involved are ok according to police @CBSPhilly pic.twitter.com/4uk5ug7lgK

Earlier in the morning, before the plow and salt trucks were out in full force, many roads were covered in snow. Even major roads like the Blue Route and 309 in Montgomery County were a bit dicey.

It was a tough time for many drivers, but not for John Mickiewicz, who says his ride is good to go in the snow.

"I got a 4x4, so I’m driving my wife to work. I’m playing hookie right now," Mickiewicz said. "My boss knows, so I’m not hiding nothing."

He said he may have some time off now, but he really can’t wait for things to warm up.

"I'm looking forward to spring and I’m sick and tired of this and I want to move to Florida," he said.