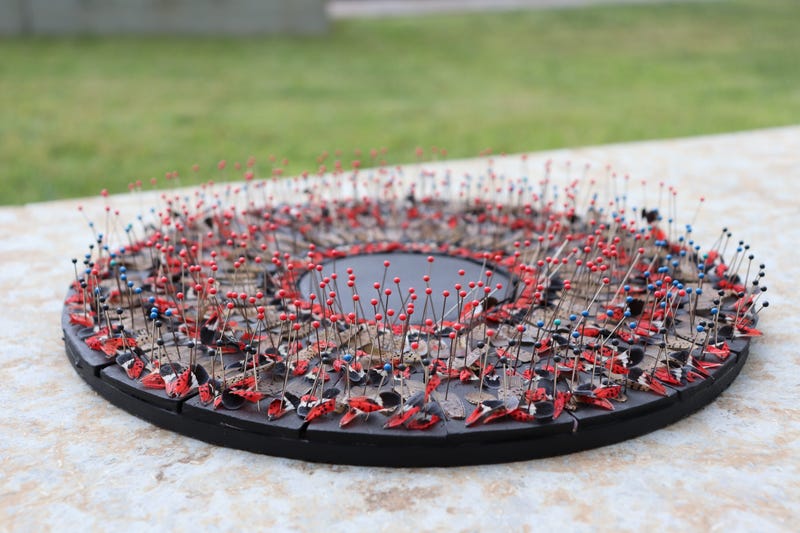 PHILADELPHIA (KYW Newsradio) — To stop the spread of the spotted lanternfly, their wings must be clipped — but this art project took it a step further.

The invasive pest is now at the heart of a community art project at Penn State's Lehigh Valley campus.

The spotted lanternfly has been the target of a hunt by students, staff, professors and residents of the Lehigh Valley community the past few weeks. Even elementary school students and retirees are part of the posse rounding up the lanternfly so a colorful portion of its remains can become part of a special art project recognizing the impact the bug has had in the region.

Conceptual artist Elsabe Dixon, of Alexandria, Virginia, spearheaded the project, which is supported by a Penn State arts grant. She said the idea is to get people engaged in a conversation about lanternflies and their destructive impact on the environment as they pursue the pest.

"The idea is to involve as many people as possible from different perspectives to come to the table and basically participate in this task, and then to see what conversations unfold."

The wings are being pinned to circular art materials in a natural mathemetical formula, known as the Fibonacci sequence.

"These are stunningly beautiful pieces of art," said Ann Lalik, gallery director and arts coordinator at Penn State Lehigh Valley, "but it's about disrupting the life cycle of this insect and killing it before it lays its eggs."

She said the "Spotted Lanternfly Zones of Syncopation" will go on public display in Centre Hall in December.