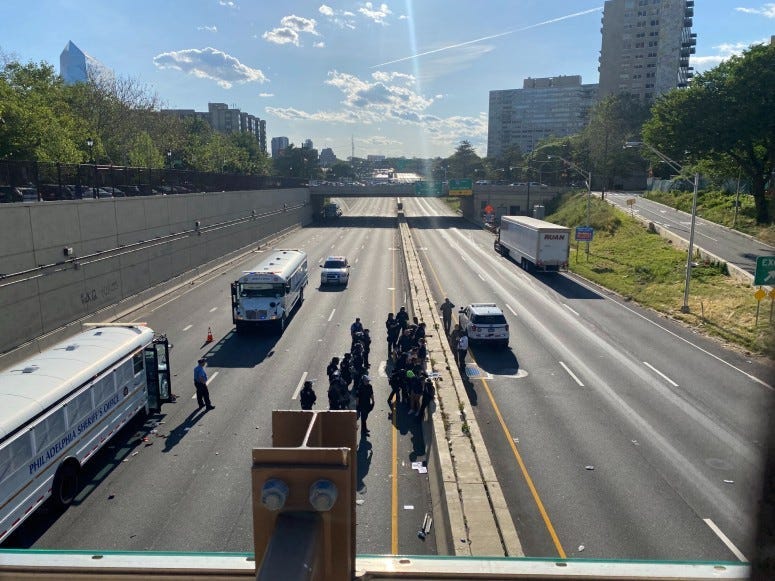 PHILADELPHIA (KYW Newsradio) — A New York Times video that refuted claims by Philadelphia police that it was necessary to tear-gas protesters on the Vine Street Expressway earlier this month. Release of that video prompted an apology from the city within a day.

In a video reconstruction using protesters video, news footage and graphics, the Times showed that the peaceful protesters on the Vine Street Expressway were actually pinned in by advancing SWAT officers, leaving them nowhere to go but up the embankment when officers began firing tear gas.

The police commissioner had said the tear gas was used to disperse the crowd on June 1 because protesters began rocking a state trooper's vehicle while he was in it.

KYW's Kristen Johanson talked with Christoph Koettl, a Times visual investigations journalist who helped to produce the video. He says the video showed that what the commissioner said wasn't true.

"That was really completely inconsistent with what we saw in the videos. Because we saw him outside his car in the tunnel. We saw him coming out of the tunnel, but we also talked with the state police, and they confirmed to us that, yes, he had left the car," Koettl said.

Koettl says the New York Times was examining whether police responses to the Black Lives Matter protests across the country actually escalated tensions.

"It became very clear that this was a really, really egregious incident. Especially the scene where the protesters try to get over the wall and get away from the tear gas was really really shocking. So we thought, like, 'Oh, we should take a closer look at this one.'"

He said he was expecting some kind of response from the city — but not such a strong and swift one.

Johanson, who was covering the protest when the tear gas was deployed, describes the incident in this KYW In Depth episode.