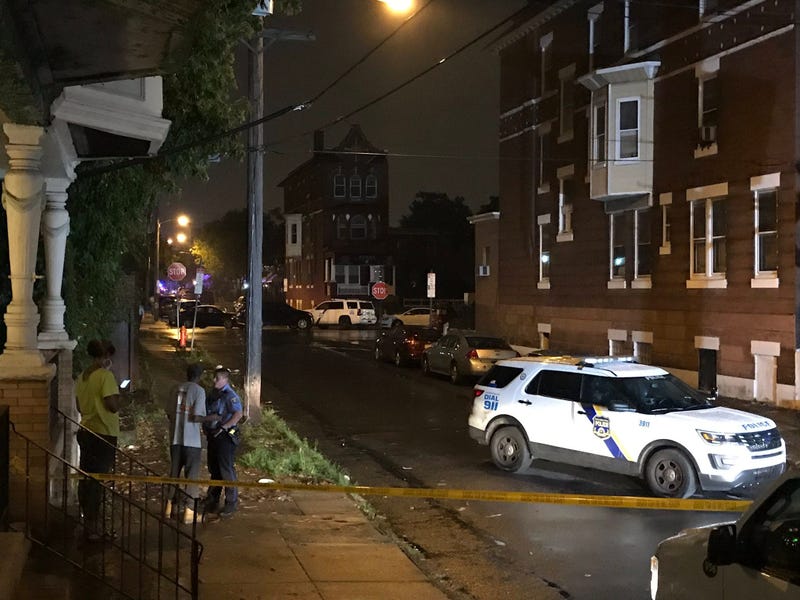 UPDATED 1:30 a.m. Get the latest here.
___
PHILADELPHIA (KYW Newsradio) — After nearly eight hours, the suspect who was in a standoff with Philadelphia police is now in custody, authorities said. The standoff began around 4:30 p.m. at a house near 15th Street and Erie Avenue. Sources say the suspect is 36-year-old Maurice Hill, who has a lengthy criminal history including possession of firearms, drug violations and theft.
Six Philadelphia police officers were shot, and two SWAT officers were trapped inside the home until around 9:30 p.m., when they were safely removed along with three other people.

The six injured officers were taken to Einstein Medical Center and Temple University Hospital. Three of the six officers who were shot were being treated at Temple and three others were at Einstein.

The injuries to all six were not life-threatening, said Police Commissioner Richard Ross. One officer suffered a graze wound to the head, another was shot in the arm and the rest were hit in various parts of the body, and they have all been released from the hospital.

“Obviously it was a very traumatic experience for them. I was talking to one of the officers who had the graze wound to the head and he had two little boys about eight or nine, nine and 10-years-old. And I kept thinking about how their lives would have changed, just with a little bit more difference in space," Kenney said.

The mayor wondered about how the shooter was able to amass so much firepower, but he said his thoughts were with the officers and their families, and he would leave that thought for another time.

Police attempted to call the shooter multiple times and were working with a family member to contact him.

At 8 p.m., Commissioner Richard Ross briefed the media on the ongoing active situation. The scene remained active as the shooter continued to fire out the window.

CBS 3 reports four women were escorted from the scene around 7:30 p.m. The women said they were inside that home on the second floor at the time the shootout started, and officers saved them and brought them to safety.

Police say the initial incident was to serve a narcotics warrant at that house.

When officers got the house, the warrant turned violent and the shooter fired multiple rounds. Officers returned fire and had to escape through windows.

Officers first called for backup when shots were fired inside the property near 16th Street and Erie Avenue:

Dozens of cops were on the scene, ducking behind cars for cover. One officer was initally seen limping and rushed to a car by fellow officers.

Police surrounded a house on the block.

The mayor, district attorney, police union president, U.S. attorney and city councilmembers all made their way to Temple University Hospital.

The police situation here at Broad and Erie has @Septa cars bypassing the Erie station. We aren’t allowed to leave the subway corridor and we apparently aren’t allowed on the trains either.

Got out of the subway and Broad Street looks like a police parking lot. An officer with a bandage over his left ear and a bloody shirt told me to walk the other way. pic.twitter.com/A1wYMaTUqB

President Donald Trump has been briefed on the situation, as well as Pennsylvania Gov. Tom Wolf.

The FBI has offered assistance to the police department. ATF agents are also on the scene.

One man told KYW Newsradio he heard gunshots earlier in the evening.

"They made everybody come back, run back. ... When I got here, I see all the cops, I see a lot of cop cars coming down, and they said like three cops got hit, you know what I mean. So, so now the guy still over there, and now they trying to negotiate with the guy."

The rest of the day was otherwise quiet in Nicetown.

Whitney Thomas lives on Erie Avenue, and the back of his home is adjacent to the house that was under siege. He told KYW Newsradio he was trapped inside his home with his family, afraid to leave.

He said he heard the initial shots just before 4:30 p.m., like a cluster of approximately 20 shots. He thought someone was hammering, then realized it was a shooting.

"I mean it was kinda scary because, as I'm seeing it on the news, I'm hearing it in real life. And like if you look out the window you can see the car on 15th Street that has been shot, windows busted," he said.

He witnessed SWAT converge on the block and black armored-style police vehicles. He saw men in handcuffs being lead out of the nearby home.

"Saying something about his family being safe and they want him to surrender peacefully and they won't shoot him."

Thomas said he's been watching the saga play out and said he has never seen anything like this.

He said someone broke his Ring motion light in order to keep the backyard dark as police continue to try to negotiate with the shooter.